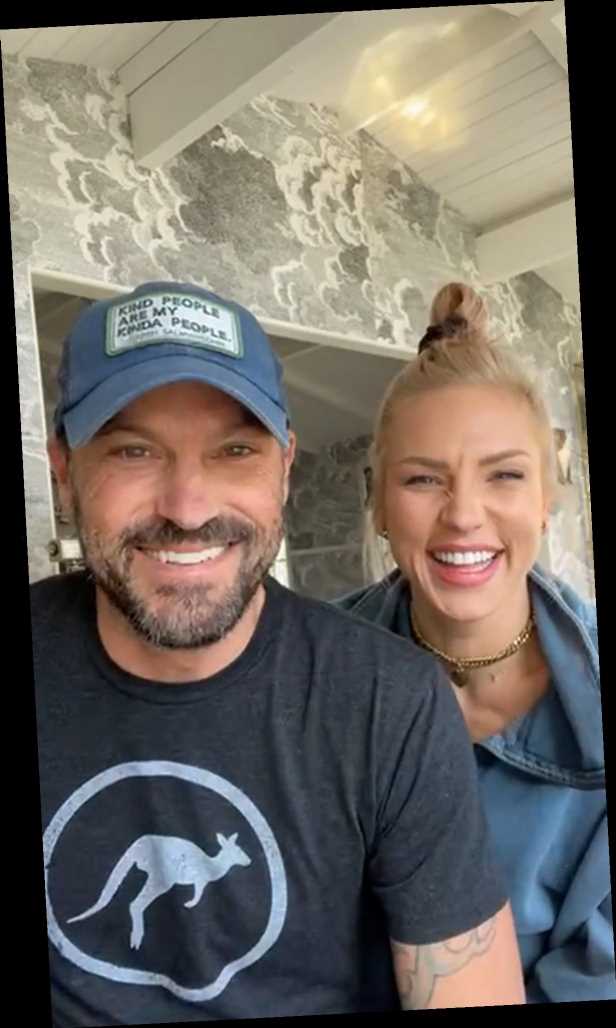 Sharna Burgess and Brian Austin Green are sharing their affection for one another in honor of Valentine's Day.

The pair opened up during a 12-minute Instagram Live session on Sunday about how grateful they are to have found each other, with Green, 47, saying, "Everyone knows this has been kind of a weird year for me, so what an amazing Valentine's Day this has been."

He went on to praise the professional dancer, calling her an "amazing, considerate, loving, kind person."

"And it's funny — I kinda feel like when you put yourself in a space where you, on some level, decide that you're going to surround yourself with people that help you move forward on a path instead of pulling you back, that they do that," he said.

"Sharna's been amazing in my life — not only for that reason, but that's been a big thing for me. She's been so invaluable, she really has," continued the Beverly Hills, 90210 alum. "And what a great way to start 2021 — to find an amazing person and go into it with a positive feeling and outlook and really a sense of, 'This could be the year that starts something. This could be the start of something amazing.' "

Burgess then shared her thoughts about Green, admitting that he took her "completely by surprise" and that she has "never known a man like him." "Witnessing someone that is such a good human and an amazing father, and the way that he treats everybody with respect and the way that people treat him is, in itself, proof of the kind of human he is and the type of human that I want in my life," added the Australian dancer. "So I'm incredibly grateful that 2021 started off this way."

Following Green's split from Megan Fox, a source told PEOPLE in December that he had been seeing Burgess "for a few weeks" when they were seen at Los Angeles International Airport departing for a trip together.

And while they hadn't labeled their relationship as of mid-January, the actor also spoke with KTLA last month about dating the Dancing with the Stars pro and how being in lockdown amid the ongoing COVID-19 crisis helped them "connect" right away.

"I think it helps people talk a little bit more and connect a little bit more because you don't have the physical ways of doing it," Green said. "You don't have places to go and other distractions. It helps focus the situation a little more, which I think was really helpful. And Sharna was completely open to it, and so was I, so it's been a good situation so far." "It was amazing, but we did make the grave mistake of going on a weekend," said Burgess of their four-day trip, during which they went sledding and inner-tubing. "At one point, it was a three-and-a-half-hour wait to get into a restaurant and they weren't taking reservations."

"We went to a liquor store and yeah, I made liquor-store steaks," Green added, laughing. "They had a meat department, which was the last freezer down at eye level on that rack, and they had some steak and some ground beef. And I made steaks that were … about paper at the point when they were done. But they were tasty."

But still, "The kids were super happy," said the father of four. "They had mac and cheese and fish sticks. We had some fried rice with chicken from the night before and liquor-store steaks. It was a good run for us."