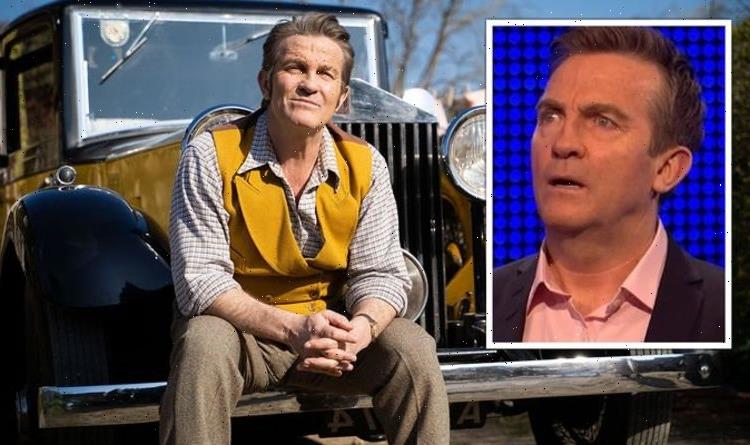 The Larkins is about to make its ITV debut on Sunday (October 10) and it will provide the perfect dose of escapism. The heartwarming family drama follows the Larkin family in the 1950s and it features some eccentric characters. The Chase’s Bradley Walsh spoke to Express.co.uk and other media about when he got the call for the role.

The Larkins follows a Kent family as they give fans insight into rural life as a working class unit.

David Jason played the original Pop Larkin in the 1990s series, with Walsh playing the role in the latest adaptation.

Pop’s wife Ma has been taken on by Joanna Scanlan, and Walsh’s own son Barney is playing village policeman PC Harness.

Bradley told Express.co.uk he was a little worried when he first accepted the role, due to his other commitments.

He said: “When I got asked to play pop I said yes immediately and I thought ‘wow, hang on a minute, what have I done?’

“Because, you know, anything that you do has time constraints on everything.

“Then the next question I asked was who is writing it and they said Simon Nye and I was a massive fan of The Durrells actually.

“Simon’s body of work is amazing. I didn’t know the [Darling Buds of May] books and I maybe watched one episode back in the day in the 90s.

“It wasn’t really my sort of area of expertise, then they told me Simon was writing it and I thought, well that’s great.

“That’s absolutely brilliant, so that was the defining moment.”

Speaking about the production, Walsh added: “Don’t forget we had to push this back, it was a long time coming.

“So what was brilliant about it, in the end, was everyone sort of stayed on board and we got really lucky.”

The TV presenter said he was drawn to the series because of its escapist nature.

He added: “Having read the script it was very warm and for me, it was a bit of a no brainer in the back of my mind.

“I was thinking this is a very warm, nostalgic show, it worked perfectly I really enjoyed making it and watching it.”

Walsh confirmed he has watched the first two episodes ahead of the series debut on Sunday.

When asked whether he skipped to the bits where he appeared on screen, he said: “I totally forgot it was me, I was just looking at the antics.”

Rounding off the cast is Liam Middleton as Montgomery Larkin, Sabrina Bartlett as Mariette Larkin and Lydia Page as Primrose Larkin.

In the trailer for the series, Walsh’s character Pop is seen introducing himself and his family.

The patriarch of the household is known for being a ‘wheeler dealer’ type who can get his hands on almost anything.

Fans of the original series are looking forward to seeing the presenter in his latest acting venture.

The series is made up of six episodes and the synopsis for the premiere reads: “There is excitement at the approaching May Day Fair and new blood in the village.

“But daughter Mariette has bombshell news and the tax man comes calling, leaving the Larkins’ future looking far from rosy.”

The series has also been given a Christmas special order, so fans will be seeing more of Walsh in the role very soon.

The Larkins airs on ITV at 8pm on Sunday, October 10.