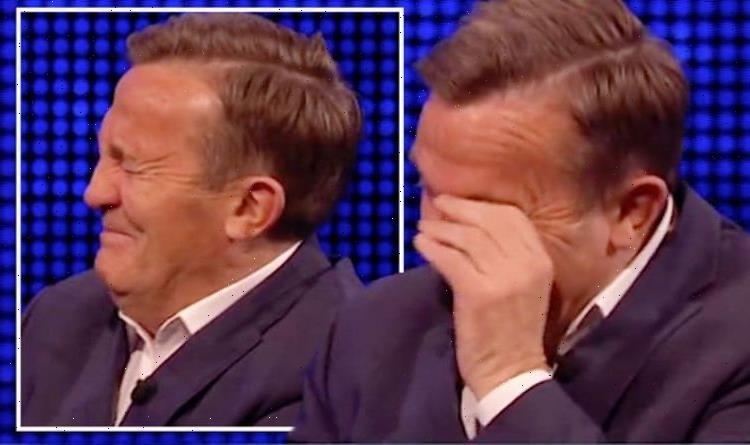 The Chase: Bradley Walsh in stitches at his own joke

The ITV game show host was reduced to tears by his own pun during Tuesday’s The Chase as contestant Jo was pressed on her knowledge of African snakes. Bradley Walsh had to take a moment to recover, leaving Chaser Shaun Wallace nonplussed by his poor attempt at humour.

The third player on Tuesday’s show, Jo, was asked to identify Africa’s longest venomous snake, which turned out to be the Black Mamba.

Sadly she chose incorrectly, but Bradley couldn’t help cracking a joke to alleviate the tension.

“Longest snakes in Africa,” he said. “It’s an exclusive club. Mambas only.”

Shaun was caught off-guard by the wordplay and gave out a rare laugh, whilst Jo admitted his joke was “very good”.

However, it was Bradley himself who was the most affected by the obvious gag.

The presenter took several moments to compose himself as he laughed into his hand.

He even had to wipe tears away from his eyes, prompting frustrated Chaser Shaun to give him a stern warning.

The Chaser advised: “Now, Brad, you should never laugh at your own jokes.

“Even if it is funny, but you should never laugh at your own joke.”

The ITV host prompted more laughter from the audience as he picked up on The Chaser’s truncated English.

“Half-witty?” he exclaimed. “Have you been speaking England for long?”

Thankfully the presenter was eventually able to recover, only for Jo to be knocked out by Shaun’s correct answer.

Bradley’s attempts at zoological punnery also sparked quite the reaction from The Chase viewers, who stormed Twitter to mock the snake-based one-liner.

Twitter user @MissLionHeart posted: “F**k a duck, Bradley, that was a terrible joke, even for you!”

Whilst Biggzs insisted: “Stop laughing at your own jokes Brad. Klaxon.”

However, not everyone was as disheartened by the gag as the stony-faced Chaser.

The Chase will be back soon with another trivia mastermind facing four new players, who may take a little more kindly to Bradley’s comical hosting style.