Big Sky made a big return from its hiatus Tuesday, offering up two back-to-back episodes that introduced us to a whole bunch of new faces — a lot of ’em perhaps not on the up-and-up. And Ronald is still on the lam, three months after the events of the previous episode. So let’s not waste any more time: Here’s what went down in “Catastrophic Thinking” and “All Kinds of Snakes.”

THE SKILLS THAT PAY THE BILLS | In the time since Legarski died and Ronald got away, Cassie and Jenny have been working mostly domestic cases — cheating husbands and the like. While investigating a potential affair, they realize that the guy they’re staking out (Alan) probably isn’t stepping out on his wife; his shady behavior likely stems from the trafficking of some mysterious substance that gets him in a lot of trouble.

There’s a lot of runaround to find Alan, who goes missing, and his wife, Naomi, and her dad, Bruce, get involved. But eventually — after Alan kills a hitman known as The Snail — The Snail’s boyfriend comes looking for him. The whole thing ends with Jenny shooting Snail’s boyfriend and saving Alan, who was ferrying… wait for it… black market thoroughbred semen. 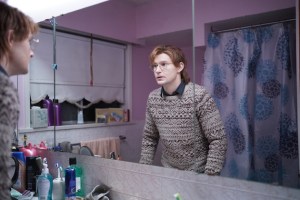 RONALD ON THE RUN | Is that guy with the knit cap, long blonde hair and round glasses an evil John Denver? Nope! Just Ronald, wearing what’s gotta be a wig (right? Hair doesn’t grow that long in three months) and pretending to be a meal-delivery driver named Arthur. He’s hiding out in plain sight, dating a convenience store clerk named Scarlett who has a young daughter named Phoebe and a nosy sister named Mary. He appears to like Scarlett’s seemingly demure ways, and it seems like he’s trying to curb his urges: For instance, when Mary rubs him the wrong way, he slips into the bathroom and zaps himself in the leg with the Taser he has taped underneath the sink.

But when Scarlett finds the Taser, she teases him about his “secret” and hints that if he tells her his, she’ll share some fantasies of her own. This makes him angry, and we all know what happens when Ronald Arthur gets angry. Plus, Dewell & Hoyt is getting some heavy breathing calls, and Jerrie — who’s now the office’s receptionist — just knows it’s Ronald making himself known. 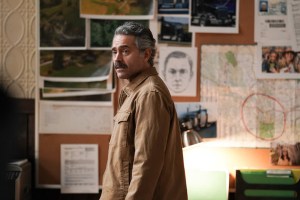 MARSHAL YOUR RESOURCES | Frank Lindor, a U.S. Marshal played by The Affair‘s Omar Metwally, shows up in Helena and tells Cassie and Jenny that he’s investigating Ronald’s case. The ladies, especially Cassie, don’t take this very well — especially because Lindor is an odd duck. But he seems to mean well, and when he gets a lead on Ronald (the guy slept at his mother’s grave one night), he writes a note indicating eternal love and leaves it on top of the headstone. 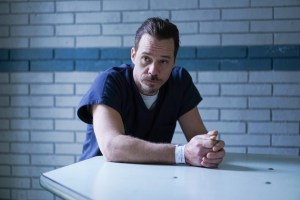 EX MARKS THE SPOT | Blake Kleinsasser (Once Upon a Time‘s Michael Raymond-James) is one of Jenny’s old boyfriends, and he’s currently in jail for attacking the daughter of a man who used to work for Blake’s dad, Horst (Monk‘s Ted Levine). Horst is an ornery, violent man who’s recently had a stroke and is trying to figure out which of his children should take over his ranch after his death. In addition to first-in-line Blake, there’s John Wayne (SIX‘s Kyle Schmid), the kinda-psycho Rand (Pitch‘s Ryan Dorsey) and Cheyenne (Life UneXpected‘s Britt Robertson).

Blake calls Jenny, swearing he didn’t do what he’s accused of and asking for her help. So she and Cassie meet with him… and suddenly all of the Kleinsassers and the entire town is either actively threatening them or getting in the way of their investigation. Their tires are slashed, and their car is splashed with blood. The local sheriff (ubiquitous guest star Sebastian Roché) shuts down their queries and requests to see the files related to Blake’s case, but it looks like maybe the ladies will be able to make some headway via a woman who works at the sheriff’s office.

Later, while Cassie heads to the bar — and winds up meeting half of the Kleinsasser siblings there — Jenny visits the ranch and has tea with Horst’s wife, Margaret (The Killing‘s Michelle Forbes) before Horst shows up and kicks her out. Undeterred, she drives around the back and sneaks onto the property, inadvertently finding Rand cooking meth in a trailer in the woods. He sees her and gives chase; when she falls into a pit of cow carcasses, he brandishes a knife and smiles in a very disturbing way.

And Cassie’s not doing much better. Despite committing no traffic infraction, she gets pulled over by a cop on the way back to the motel. He forces her out of her car, handcuffs her and tosses her in the back of his cruiser… then drives right past the sheriff’s office.

“Where the hell are you taking me?” she demands to know, but he doesn’t answer.

Oh, and Blake? He’s out of jail, and Horst — who earlier in the episode swore he’d never get his hands on the ranch — is there to pick him up.

Now it’s your turn. What did you think of the back-to-back episodes? Sound off in the comments!