The family sports drama is familiar territory, especially for the House of Mouse. The studio has crafted all manner of acerbic coaches and ragtag teams needing to be whipped into shape. But none of those past incarnations had John Stamos, America’s favorite rebel uncle, at the helm. And it is Stamos’ presence that makes the series charming, sweet, and more enjoyable than it has any right to be — especially considering how horrible his character starts out.

Stamos plays Marvyn Korn, a former coach for the NCAA who was benched for being the guy throwing chairs and berating referees. He’s given a foot back in the door by coaching the girls basketball team at the elite La Jolla prep school, Westbrook School for Girls. Almost immediately comparisons to “A League of Their Own” abound.

Marvyn is Westbrook’s Jimmy Dougan (Tom Hanks), who sneers at the concept of not just teaching high school, but a bunch of girls! Almost immediately upon meeting his team he tells one girl to lose weight, leading to pushback from the school’s principal Sherilyn Thomas (an always delightful Yvette Nicole Brown).

“Big Shot” isn’t just about the second chance of its Coach Korn. The entire show’s existence is a second chance, starting as a script creator David E. Kelly and showrunner and executive producer Dean Lorey wrote six years ago. As they said during the show’s winter TCA panel, the series went to ABC where they passed, only to have past scripts revisited as fodder for the streaming service.

That backstory is relevant because, at times, “Big Shot” feels dated. So much of this series is focused on not just the team, but Korn’s realization that it’s not acceptable to fat-shame a player — or that he might actually have to get along with a Black female teacher who doesn’t see basketball as a larger priority than class attendance.

The problem is that the scripts often see something wrong with how others respond to Korn. That fat-shaming moment, rightfully called out by Korn’s colleague and fellow coach Holly (Jessalyn Gilsig), is summed up as Korn not seeing gender, but a player not at their best. When he gets into a female student’s car to give her a pep talk — and is given a stern lecture by Sherilyn on how that looks inappropriate regardless of his intentions — Korn chalks it up a nanny state making everything look bad. At times, Korn threatens to veer into being the martyr for Good Men Trying to Make an Impact. 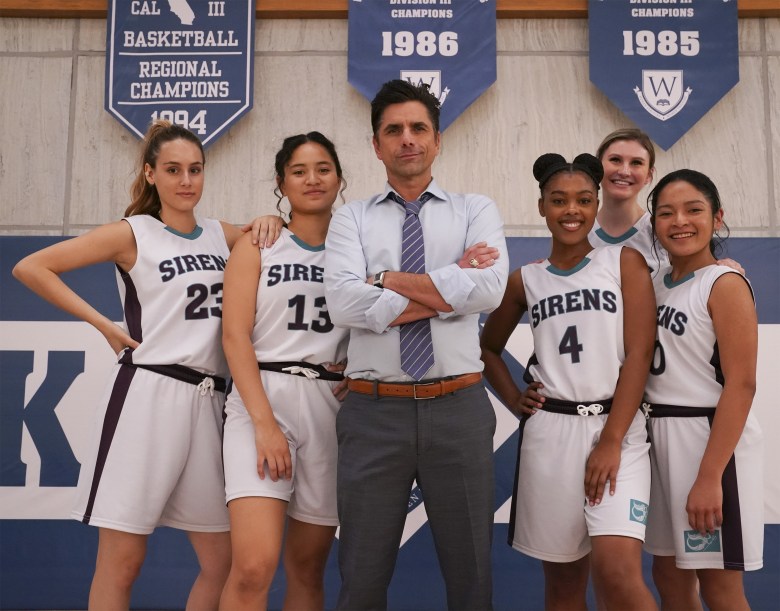 But that’s overruled by the sheer power that is Stamos. He doesn’t play Marvyn as an outright villain nor an ignorant man who genuinely doesn’t see the error of his ways. The character’s selfishness is always apparent (he has the ability to rent out two long-term hotel rooms at a posh La Jolla inn, after all). But Stamos finds a way to keep that charm and likability on the surface of the character. You keep watching because he’s so compelling to watch.

This is especially clear during the basketball sequences, when Korn eschews selfishness and remembers his love of the game. Stamos gets the opportunity to have some strong monologues, mostly in the way of pep talks. One, about the team going out and doing their best, enters into the grand tradition of sports monologues. As the season progresses, and Korn brings his daughter to live with him, Stamos is given more opportunities to see Korn’s vulnerabilities and humanity that he does well even if it is not on the page.

It helps that he’s complemented by a similarly strong roster of supporting players who also do a lot toward elevating “Big Shot” above cliché. Brown and Gilsig aren’t given a ton of screentime but both are much-needed as characters who do live in the real world and see Korn as a man with tendencies towards misogyny and privilege. The young actresses playing his team are also stand outs, though within the first few episodes their backstories feel minimal, especially in comparison to Korn’s daughter. Hopefully the series will develop them beyond one having a dead dad.

The lack of proper development for its teen girls is the most troubling aspect of “Big Shot,” all things considered, the element that feels the most performative. When you factor in that La Jolla, where the series is set, is 82.5% comprised of white people with an average household income over $190,000, it’ll be interested if the series will update the concept enough to look at the privilege being espoused at every turn. Odds are it won’t, but I can dream.

Will I keep watching “Big Shot?” Yes. It’s great inoffensive family programming with good actors doing good work (especially Stamos). It is hard not to see that this is a story that doesn’t understand how the original script has aged, but odds are the longer it goes on it will shake off the dust of a bygone era. If anything, give us more verbal sparring between Stamos and Brown.