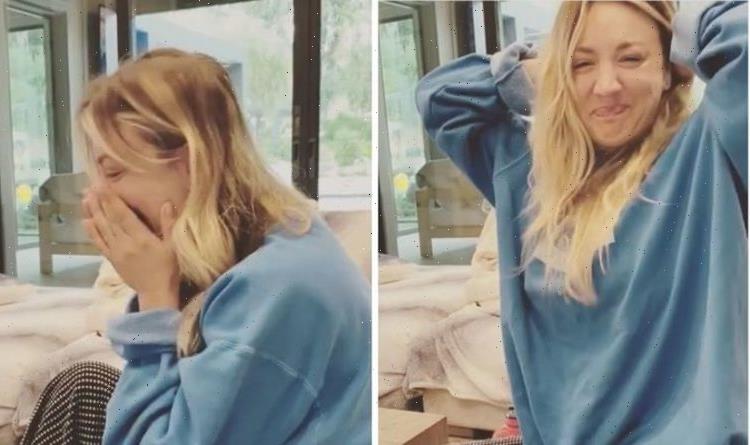 Kaley Cuoco reacts to her first ever Emmy nomination

The Emmys have recently released the full list of the 2021 nominations and Kaley Cuoco is up for an award in the category of Lead Actress in a Comedy Series, for her role as Cassie in The Flight Attendant. She took to Instagram to share her emotional reaction after learning that she had been recognised by the TV Academy.

In the video posted on her account, Kaley was overwhelmed with emotion when her name was called out.

She raised her hands, clapped and then laughed in celebration of receiving her first-ever Emmy nomination for Lead Actress in a Comedy Series.

Kaley is best known for playing Penny Hofstadter on the Big Bang Theory and despite the sitcom also being award-winning, this is the first time the actress has been recognised as a lead.

In the caption, she wrote that she was a “first timer over here” and thanked the awarding body for “a moment I will never forget.”

In the second slide, Kaley also reacted to the news that The Flight Attendant was also up for the award of Outstanding Comedy Series.

To this news, she slid to the ground, off her sofa and burst into tears with her head in her hands.

She watched the rest of the nominations completely stunned and exclaimed that she was “so happy right now.”

Elsewhere in the caption, she thanked everyone behind the series and posted: “9 nods for team, thank you, thank you to my entire flight crew,” and called the moment “surreal.”

The HBO Max comedy-thriller follows fight attendant Cassie Bowden (played by Kaley Cuoco) as she travels across the world for work and recklessly drinks, often blacking out.

This backfired one night when she woke up in Bangkok next to the dead body of fellow passenger Alex Sokolov (Michiel Huisman).

The pair shared an intense night together after seeing sights and drinking their way around the Thailand capital.

After seeing the slash Alex had across his throat, Cassie panicked and cleaned up the scene of the crime before heading for her flight.

In the series, fans watched as Cassie maintained her innocence after being questioned by law enforcement, with the full support of her lawyer best friend Annie Mouradian (Zosia Mamet).

However, the show also explores her childhood and how the abuse she suffered played a huge contribution to her reliance on alcohol.

Cassie battled hallucinations and inconsistent flashbacks as she tried to piece together her memory of the wild night.

With nine nominations the show was clearly a huge hit with fans as well as the voting members at the Emmy awards.

Competing against Kaley in the category of Lead Actress in a Comedy Series is Aidy Bryant for her role in Shrill and Tracee Elliss for portraying Rainbow in Black-ish.

This category also features Jean Smart for Hacks and star Allison Janney for her part in Mom.

Elsewhere in the Best Comedy Series, competing alongside The Flight Attendant is Black-ish, Cobra Kai, Emily in Paris, Hacks, The Kominsky Method, Pen15 and Ted Lasso.

All episodes of The Flight Attendant are available to stream on HBO Max.