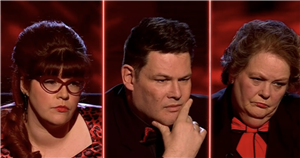 Beat The Chaser fans couldn't believe their luck as the first contestant of Monday's show decided to take on all five chasers in hope of winning £50,000.

Fans were rooting for the brave contestant, but some were left outraged as the match turned tense, with Jenny Ryan answering two final questions wrong.

She was saved by her co-star Mark Labbett, who is better known as The Beast, who answered correctly in the final second.

Opponent James had three seconds remaining on the clock but couldn't quite manage to answer in time, meaning he was defeated in the brutal match.

Viewers of the show were up in arms as they took to Twitter to fume about the close-shave competition.

One online user wrote: "As Brad would say….. OUCH!!! #BeatTheChasers."

A second chimed: "One second to go. What a game. #beatthechasers."

Another penned: "Ouch, 1 second costing you £50k is brutal #BeatTheChasers."

While a fourth exclaimed: "That was so cruel! Hard lines #BeatTheChasers."

Later on in the show, the chasers thought they had met their match as they came up against Graham who had previously appeared on the The Chase.

The Beast recognised the contestant straight away, explaining that Graham had racked up "nine correct answers in the cash builder" but didn't manage to take home any cash.

Before putting a sum of money on the table, The Vixen quipped: "Now we know you've got form you're going to get some interesting offers."

Graham was offered a staggering £80,000 for taking on all five chasers, however he opted to take on just four for £40,000 instead.

Much like the first battle James, it went right to wire, with the chaser having just three seconds remaining on the timer.

Sadly for Graham who had been fluent with his answers throughout, he couldn't manage to correctly guess the final question.

He therefore left with nothing.

Beat The Chasers airs on ITV this week from 9pm.