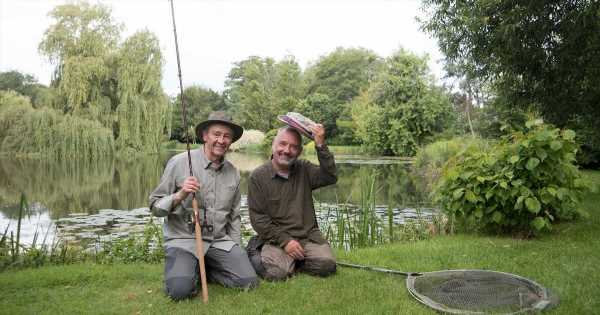 Telly star Paul Whitehouse sometimes has to poo in the river when he is filming Gone Fishing.

The Fast Show funnyman and fellow comic Bob Mortimer have scored a rating success with their BBC angling series.

At some point during a long day of filming, the pair inevitably needed the loo, which isn’t always straightforward when you are wading through cold water with no facilities nearby and the potential for a messy accident.

He said: "I don’t want to be too graphic about this.

"But one of the problems you have, especially when wearing waders, is getting enough distance between the orifice and the trouser.

"Because otherwise — you know what I’m saying — ‘Oh! It’s back again!’

"So one of the ways around this is to find a nice branch, good height — about five feet off the ground – so you can sort of hang and keep your legs out."

Whitehouse – who famously starred as one half of the DJ duo Smashie and Nicey on Harry Enfield’s Television Programme – also explained that he doesn’t always rely on his rod for fishing success.

He once improvised and caught a salmon between his feet.

Paul, 64, said: "I was wading down the river fishing for salmon and I wasn’t catching anything and I felt this thing around my feet.

"I thought it was a stick or a rusty bicycle perhaps. I bent down to extricate myself from it and it was some fishing line. And I got hold of it and there was a salmon on the end.

"It was very much alive. And I gave it back its freedom.”

The show sees the pair travel around the UK while they share their experiences of their life while waiting for fish to take the bait.

From opening up about their childhood to harrowing life-threatening illnesses they've overcome, it covers light-hearted moments while having a deep-dive into their struggles.

Paul has a number of different movies and TV shows under his belt including Ted and Ralph, Kevin & Perry Go Large and Ghost Stories.