Louise, 50, and Dan Walker, 42, were on hand to present the first BBC Breakfast of the week, reporting on the events of the weekend such as the London marathon which saw over 40,000 people run the 26 mile trek around the streets of the capital.

However, there was one runner who dressed as London landmark Big Ben in aid of charity who was hoping to break a word record as well as raising money.

As Lukas Bates tried to cross the finish line, he had great difficulty as the spier of his costume prevented him from crossing the line, with the runner needing help to make it to the end.

Although Lukas didn’t manage to accomplish to break the world record, discussing the moment on the BBC news programme, Louise asked Dan who the reining record holder was.

Beginning the discussion, Louise said: “More than 100,00 people have watched the moment that a marathon runner dressed as Big Ben, got stuck. He tried to cross the finish line.”

Watching the moment unfold, Dan continued: “He got stuck underneath the banner. Incredibly, he ran the marathon in under four hours.

“Do you know there’s a record for a landmark, running as a landmark? Three hours and 44 minutes,” Dan added, before Louise questioned: “Do you remember what the landmark was?”

Dan remarked: “You’ve gone too far now,” as his co-host tested his knowledge, leading Louise to apologise to the presenter.

“Sorry, sorry Dan,” Louise said, before Dan continued: “No, I don’t know what the landmark was. I’ll try and find out for you,” before adding the runner didn’t manage to take the crown.

“What I love about that so much is everybody’s so excited to finish the marathon, half of them don’t even notice he needs help,” Louise noted, watching the moment play back. 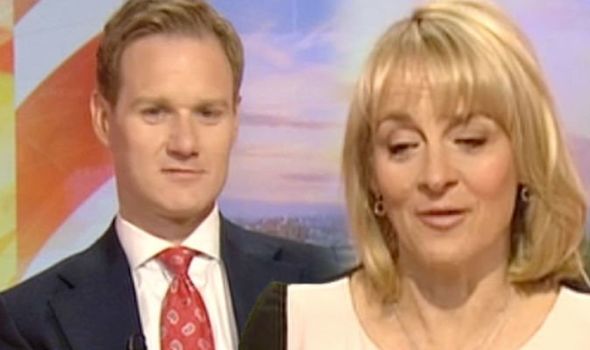 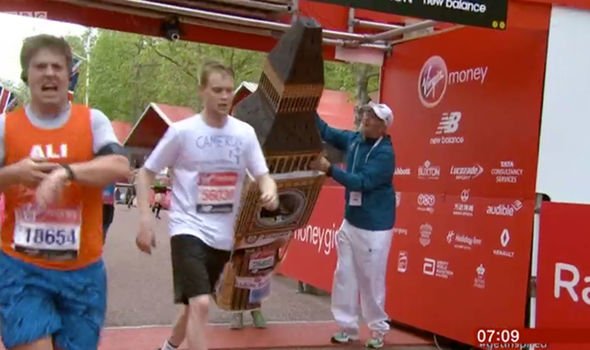 “But he got there, crucially. We did ask him to bring in his costume but he’s given it away,” Dan revealed, with the runner joining them later on in the show.

“Traded it in for a donation for his charity,” Dan told sports reporter Sally Nugent, 47, with the presenter remarking: “Imagine running the marathon in one of those things, it’s insane.”

Speaking of the moment he got held up at the finish line, Lukas said later on in the programme: “After running 26 miles yesterday, I thought the easiest part of the race would be to cross the finish line.

“As I got to it, the top of my costume, it didn’t fit through the finish line so, a very kind marshall helped angle my costume so I could get the tower underneath and complete the race.

“I always said, if I was going to do it in a costume, I wanted to go big. Maybe I went too big,” the runner added. 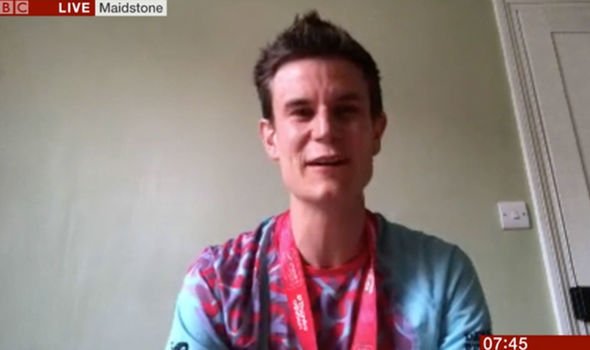 “I was far too confident. I didn’t think there was going to be any problems. It was only when I hit it [the finish line] I thought, ‘Oh dear, this hasn’t gone too plan’, Lukas continued.

The marathon runner also explained the reasoning behind giving away his costume, telling Louise and Dan: “It’s clearly quite large and to transport it is a problem and to try and keep it is a bit awkward.

Asked if he would make the attempt again next year dressed as another landmark, Lukas said: “I don’t think so. I’ll leave it for someone else next year.

“It was a great experience and one I will cherish for my life but, it was so tough. It was a lot harder than I expected, every part of it including the race and the finish line,” Lukas concluded.

Last week, BBC Breakfast presenter Naga Munchetty, 44, left viewers in a frenzy as they became distracted by her new glasses.