BBC Breakfast correspondent Colin Paterson has been reporting live from Glastonbury since the first festival-goers began their journey to the campsite earlier in the week. However, following the by-election results which saw the Tories lose both seats, BBC viewers questioned the focus on Glastonbury coverage.

Liberal Democrat Richard Foord became the MP for Tiverton and Honiton in the biggest ever majority turnover in a by-election.

Meanwhile, the Tories lost out to Labour’s Simon Lightwood in Wakefield.

Throughout the morning, hosts Naga Munchetty and Charlie Stayt checked in with Colin at the festival site.

Colin arrived at Glastonbury on Wednesday as the first eager festival-goers entered the site. 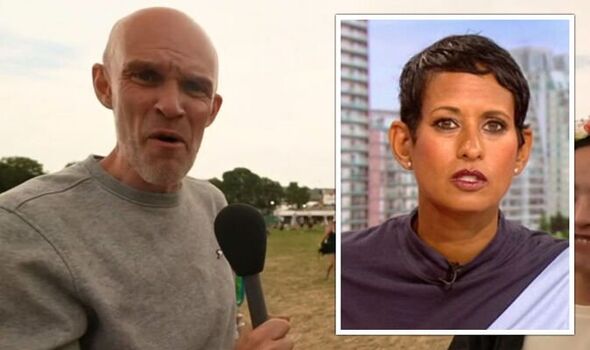 The entertainment correspondent spoke to Glastonbury fans as well as checking out some of the more unusual festival acts.

However, BBC Breakfast viewers tuning in hoping to gain an insight into the by-elections were left disappointed by the Glastonbury segments.

@Frobisher75 wrote: “@BBCBreakfast spending more time talking about #Glastonbury2022 and sport than the #byelection2022 I wonder what would have happened had the results been different? Still they’re used to covering circuses I suppose.”

@chrisredditch added: “I am so glad I’m not at #Glastonbury judging by the people in this report #BBCBreakfast.

“Is this really news? It’s a Hippy Convention and nothing else.”

@patrickreeve questioned: “@BBCBreakfast Why the obsession with Glastonbury? #BBCBreakfast.”

“@BBCNews I’ve got limited time this morning, turned on BBC breakfast for news on the by-elections and 20 mins gone and nothing, they have been talking about Glastonbury mostly,” @BobFunkhouse2 quipped.

Glastonbury was cancelled in both 2020 and 2021 due to the coronavirus pandemic.

After a three-year wait, festival-goers will get the chance to see headliners Billie Eilish, Sir Paul McCartney and Kendrick Lamar.