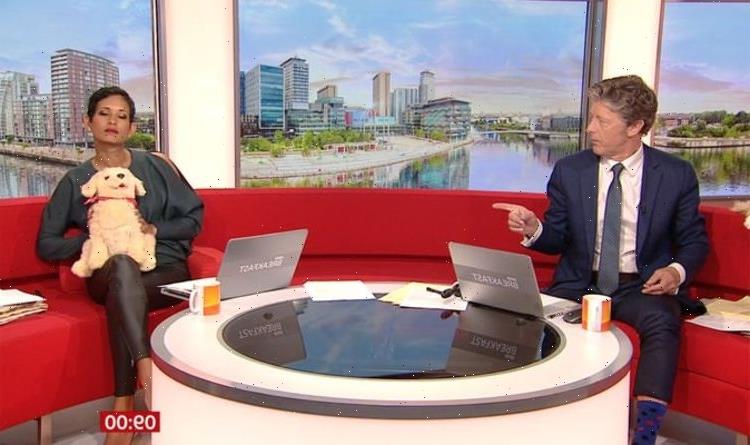 Charlie, 58, and Naga, 46, were on hand to host the first-weekend installment of BBC Breakfast and on the agenda was the idea of using robopets to help dementia patients. The pair each had their own toy pet, with Charlie holding on to a cat named Thelma and his BBC co-star sitting with a dog named Goldie. They explained the robotic features meant the animals could make noises and make just like a real pet. Joining the presenters to explain the initiative a little further was Dr Rebecca Abbott who was involved in the research of the concept.

As the interview was carried out, the presenters seemed more distracted by the robot pets they were looking after.

However, the first bit of chaos came when moments into answering the first question, Dr Abbott’s feed froze and the discussion was paused.

“What a shame,” Naga remarked as she flicked through her notes with haste to see if she could fill some of the time.

Charlie explained they were going to try and get the guest back and within seconds, the robot pet expert was back on-screen.

It wasn’t long before another bizarre moment occurred as Charlie asked the guest if she wanted to talk to his cat, Thelma. 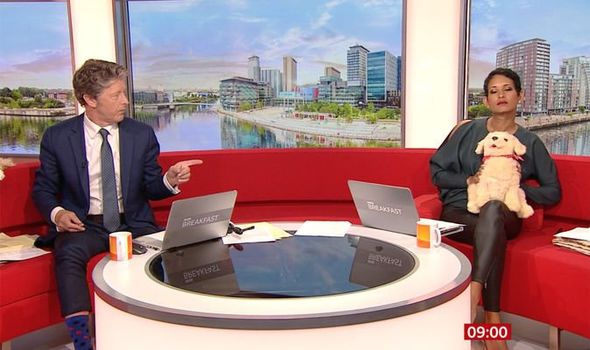 This was because Dr Abbott explained the robot pets do tend to engage with the care home residents, with the presenter taking the comments quite literally.

As he stroked his cat, Charlie asked: “Dr Abbott, is there anything you would like to say to Thelma because Thelma is just listening in here sitting on the back of the sofa?”

Dr Abbott replied: “I have to be honest with you Charlie, I have a Thelma of my own in my office which I haven’t been able to get into for a year.

“So enjoy Thelma and enjoy the reaction you get from her,” the expert continued before the presenter explained he was covered in cat hair.

Have you gone quiet now?

Praising the robopet’s authenticity, he said: “I’m covered in hair so that part of the equation has been sorted out.”

Dr Abbott replied: “It’s very real, isn’t it and I think that’s the thing about them. They’re more than a cuddly toy.

“Care homes can’t have pets but they can have this halfway house which is like a pet and for some residents, that’s perfect companionship.”

Concluding the interview, Charlie thanked the guest for taking the time out of her morning to speak with them on the show.

However, the end of the discussion was slightly chaotic as Charlie told his co-star: “It’s been fun having the [robopets] here.

“I’ll be honest [Naga], there were a few times I was slightly confused whether the noises were coming from you or from the dog.

“I have been a little bit confused by that,” he continued, with Naga wanting to move the conversation on swiftly.

Noticing his co-host was ignoring him, Charlie added: “Have you gone quiet now?”

Taking to Twitter to react, one viewer wrote: “Turned on to creepy horror style cats and dogs #BBCBreakfast.”

Another posted: “If these robopets are anything like a real pet, it’s easy to see how they work. Having a pet is one of the nicest things #BBCBreakfast.”

Whilst a third commented: “If you ever needed any more confirmation the world has gone mad, woke up this morning to #BBCBreakfast news to see #nagamunchetty #charliestayt with a toy cat and dog.

“My dogs going psycho at the robocat meowing on the TV. My poor neighbors #BBCBreakfast,” a fourth shared on the social media platform.