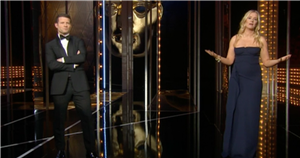 The British Academy Film Awards ceremony got off to an awkward start on Sunday evening as host Edith Bowman made an awkward slip-up.

Taking place at the Royal Albert Hall in London, the event featured awards and live musical performances with nominees attending via live-stream alongside a virtual audience.

Kicking off the show, presenter Edith said: "Welcome to you at home and our live audience who are also at home"

Co-host Dermot O'Leary added: "Who also have the pleasure of seeing us in all our live and unedited glory.

"Currently around the globe some of the word's biggest stars have got their slightly stressed PAs to dial in for them.

"We're all one big lovely bubble so would could possible go wrong?"

A confident Edith responded: "Absolutely nothing. In fact, I'll stake your relationship on it.

Realising her error, the presenter continued: "Or should I say reputation on it."

"Relationship?: Dermot jokingly gasped. "I was going to say those are pretty high stakes."

Both presenters and the virtual audience watching at home erupted into laughter following the hilarious moment.

The BAFTAs remembered Prince Philip’s support of British cinema at the top of the programme as the awards ceremony took place two days after his death.

The Duke of Edinburgh died on Friday morning at Windsor Castle at the age of 99. Prince Philip was the first ever president of Bafta from 1959 to 1965 and started off the royal patronage tradition that saw The Earl Mountbatten of Burma, the Princess Royal, and Lord Attenborough take up the post.

His grandson Prince William has been president since 2010.

X Factor presenter Dermot said that Bafta was "extremely saddened" to learn of Prince Philip’s death, with co-host Edith saying that it was Prince Philip and Her Majesty the Queen’s "support throughout these years that in many ways has allowed Bafta, a leading charity in the arts, to continue in difficult times and still be here in 2021."

She added: "The Duke of Edinburgh occupies a special place in Bafta’s history."

Edith also shared their thoughts with the Royal family.

Liam Payne opened the glitzy ceremony with a show-stopping rendition of his latest single.

The former One Direction hunk wowed fans across the nation with two next level performances, kicking-off an unforgettable evening of entertainment.

He made history with a one-of-a-kind experience, where his real-time AR avatar was unveiled, before he hit the EE BAFTA stage to deliver a spectacular show, powered by EE’s 5G award-winning network.

The real-time AR experience was pre-recorded for fans across the UK, who enjoyed an exclusive first-look of Liam’s avatar ahead of the artist’s much-anticipated opening ceremony performance.

As the music kicked in, the artist’s avatar appeared on the Royal Albert Hall stage, opening the show in a one-of-a-kind 5GEE-powered duet, with real-life Liam who was dressed to impress in a sharp grey suit.

During the euphoric performance, viewers were transported through a year of film before Liam stepped out of the hologram box to reveal the spectacular EE BAFTA setting.