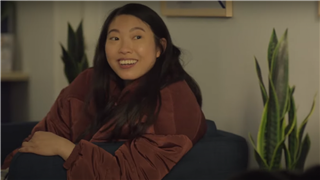 Awkwafina is back as Nora.

Comedy Central’s Awkwafina Is Nora From Queens returns for season 2 on Wednesday with back-to-back episodes, and in ET’s exclusive sneak peek, Nora (Awkwafina) has a (hilarious) chance encounter with Saturday Night Live‘s Chloe Fineman while at the doctor’s office for “a potpourri of things.”

After Nora fibs her way through most of the iPad questionnaire about smoking, vaping and drug use, she makes herself comfortable in one of the chairs where she meets the quirky Greta (Fineman).

“Long story short, I swallowed a key,” Greta reveals, catching Nora by surprise. “And a little bit of hair. But don’t worry, it was human.” As if that fact somehow makes it slightly more OK.

When Nora tries to bond with her by likening her name to Greta Thunberg, the 18-year-old environmental activist, this Greta confirms she’s “nothing like her.” “She’s a she-ro,” Nora says matter-of-factly.

“A she-ro?” Greta asks, unenthused. Thankfully, the nurse calls Nora in for her check-up at that exact moment and she leaves her new friend with a wish. Watch the exclusive clip below to find out what it is.

Awkwafina created, writes and stars in the comedy series inspired by her real life growing up in Queens, New York. Raised by her dad, Wally (B.D. Wong), and grandma (Lori Tan Chinn), alongside her cousin, Edmund (Bowen Yang), Nora Lin leans on her family as she navigates life and young adulthood in outer borough-NYC.

In season 2, Nora contemplates her path in life, Edmund pursues his dream of acting, Grandma takes a stand and Wally grows closer to Brenda (Jennifer Esposito).

Awkwafina Is Nora From Queens returns Wednesday, Aug. 18 at 10 p.m. ET/PT on Comedy Central. For more, watch below.