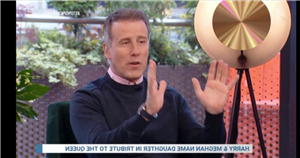 Anton Du Beke has slammed Prince Harry and Meghan Markle by telling them they need to "grow up", and has branded their new baby girl's name Lilibet Diana "nauseating".

The Strictly Come Dancing judge, 54, had some savage words for the Duke and Duchess whilst appearing on Monday's episode of Steph's Packed Lunch (7 June).

This comes after Harry and Meghan announced the birth of their newborn baby daughter Lilibet who was born on Friday in Los Angeles – and has been named after Harry's grandmother and his late mum.

Lilibet is partly named after Harry's grandmother, Queen Elizabeth II, as Lilibet is her favourite nickname, and her middle name Diana is a reference to his late mum, Princess Diana.

Chatting on the Channel 4 lunchtime show, host Steph McGovern asked the panel what they thought about the name, and went straight to dancing star Anton.

Starting off, Anton told Steph: "Well you know, the right thing to say is that it's lovely and that it's fabulous and that [I'm] delighted and well done."

Then, brutally, Anton launched into a passionate rant at the Duke and Duchess, saying: "I find it nauseating and irritating that they have done that."

After prompting host Steph to call out "Ooh!" in surprise, Anton continued: "The thing is I don't know them but I just want to say 'Oh grow up'."

"That's all I want to do because I find it irritating".

Steph then burst in, cutting Anton off by defending the royal couple's baby name by crying out: "But why! Isn't it nice?"

He began saying "But having said that…" before Steph saw the funny side of Anton's rant, saying: "You know your MBE is out the door now!" which caused the Channel 4 studio to erupt in laughter.

Anton added: "If the Queen is happy about it and delighted and it's all fabulous then great."

In that case, he says, "Then I'm just a misery guts and don't listen to me."

"So I'm delighted for them. I'm delighted they've had the baby, that's gorgeous and everything is fabulous in that department but the whole naming thing… I just go 'Oh grow up'."

Harry and Meghan are currently living in their $14 million mansion in Montecityo, California.

Lilibet was born at Santa Barbara Cottage Hospital on Friday 4 June at 11:40am, making her the Queen's 11th great-grandchild.

Proud parents Harry and Meghan said it was a "very special time" and described their new daughter as "more than we could have ever imagined".

Steph's Packed Lunch airs every weekday on Channel 4 at 12:30pm.

How to Stream 'The Matrix' Online