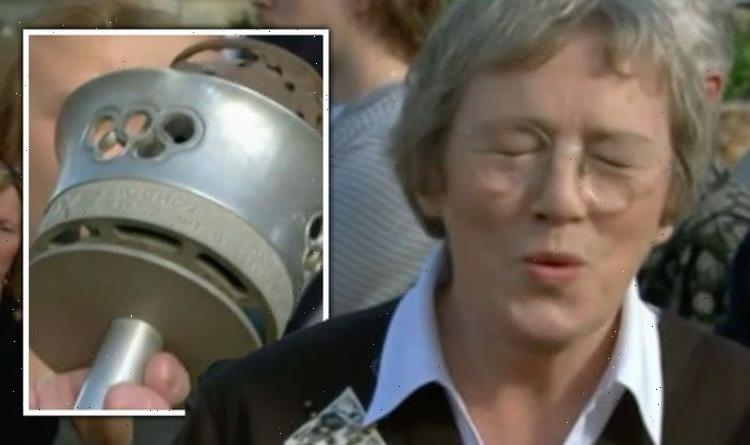 In a classic episode of Antiques Roadshow, Fiona Bruce presented a special edition of the BBC show as the team headed off to Stratford-upon-Avon in search of Shakespeare-related treasures. However, expert Paul Viney was surprised to discover the history behind an Olympic family heirloom worth up to £3,000.

Paul began: “Well, this is a great moment for me actually holding an Olympic torch.”

The expert asked: “How did it come into your possession?”

“It came into my possession because my father carried it from Bletchley to Dorking in 1948,” the guest revealed.

“So for the London Olympics?” Paul questioned.

“Yes, for the London Olympics, I was five years old at the side of the road,” the guest recalled.

“Do you remember it?” Paul asked and the owner replied: “Not very well just vaguely.

“But I’ve seen this all my life in my father’s house and then eventually it came to me.”

“Well, if we look at it, it says ‘14th Olympiad, 1948 Olympia with thanks to the bearer’ so he must have been a very good athlete,” Paul concluded.

The guest revealed she was very proud of her father’s athletic achievements.

She noted: “He was a very good athlete, he was a Surrey quarter-mile champion.”

Holding up a photograph of her father, she added: “Here he is holding the torch just before it was lit.

“And obviously we treasure this photograph very much indeed.”

“Well so you should actually and it’s wonderful to have this Olympic torch here,” Paul replied.

“And you have it on display at home?” Paul asked and she said: “We do have it at home, yes.”

“There would be a number of keen collectors for a piece such as this and I think if it came up at auction it would probably fetch somewhere between £2,000 and £3,000.”

Stunned, the guest remarked: “I think we better take very, very great care of it.”

“So you should but hopefully it’ll stay in the family,” the expert replied.

“It definitely will stay in the family and that’s why we have it because we have two sons,” she explained.

“Well, can I just dream for a moment longer?” Paul asked. “Thank you very much for bringing it in, wonderful.”

Antiques Roadshow continues on BBC One on Sunday at 7pm.