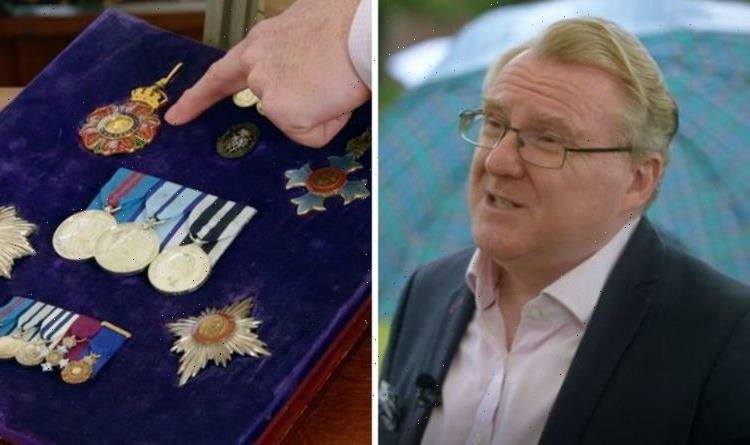 Antiques Roadshow expert Mark Smith said the collection had “made his day,” and was able to confirm the history behind the medals. The guest on the BBC show brought along a haul of World War One medals, several of which had belonged to his grandfather. But the owner of the impressive collection was clearly not expecting the five-figure sum Mark unveiled to him, and he and his family were left stunned.

Assessing the collection, an elated Mark said: “Wow – what a day. I love medals, and what a selection you’ve got.”

He asked: “Who are these people, and who are they to you?”

“Do you know anything about what these people did?” asked Mark.

“And he was responsible for breaking one of the spy rings between Berlin and India.”

“Wow!” Mark exclaimed. “You can see why he got so many medals.”

The owner of the medals continued: “Henry was in the Indian Medical Service and he became honorary surgeon general to the Viceroy. Apart from that, I don’t know a great deal.”

“And do you know anything about this gentleman?” Mark asked, pointing towards a final picture.

“Not a lot, no,” the owner replied. Mark responded: “Three incredibly distinguished careers.”

He went on to explain each medal, stating: “So that is a lovely group of medals from the Indian period of Raj, but almost at the beginning of Queen Victoria’s reign.

“Now, if we look at this one over here – he is a soldier who’s also fought in India. He has this, which is called the Most Eminent Order of the Indian Empire.

“Then this thing on the end here is the Delhi Durbar Medal, and that’s the one for 1911.

“So when George V came to the throne, he was Emperor of India, and they threw what is known as a Durbar, like a big parade, and those men who were on parade that day were given what is known as the durbar medal.

“This chap is a policeman. He has a king’s police medal, but it’s Edward VII, so it’s very rare.

“Then he has the earlier Durbar and then the 1911 Delhi Durbar Medal as well.”

Alluding to the medals, he continued: “Look at that, I mean, red enamel, gold – just beautiful.

“Now, I know you haven’t had them very long and they’re a family heirloom, but they do have value.

After a moment of silence, in which the owner and his family appeared gobsmacked, he remarked: “Oh my goodness.”

Mark commented: “Fantastic, thank you so much, I mean that genuinely, that really did make my day.”

“Wow, thank you very much as well, thank you,” the guest replied.

Speaking about his reaction, he revealed: “The valuation was extraordinary. Wow, I never thought that at all.

“We’ve always had my grandfather’s medals but to have the other two sets of medals, and link the family together was just as important for me today. It’s been fantastic.”

Antiques Roadshow is available to catch up on BBC iPlayer now.