Donald Trump supporter Nigel Farage joined Andrew Neil on the BBC’s US Election special to debate the president’s comments on voter fraud. The president told an audience at the White House that he had “won the election” and was ready to ask the Supreme court to halt all vote-counting on the basis the votes yet to come in are fraudulent. Neil clashed with Farage when the former UKIP leader agreed with the president the postal voting system is open to fraud.

Neil began: “The president said, ‘People are trying to disenfranchise the United States. What people?’”

“State by state they’ve all done this differently. I’m personally very anti poster voting in totality but I get it in a pandemic that option had to be offered.

“Should there be some rules that states should count all the votes on the night? I would have thought that was something the extreme court would have agreed on.”

Read more: Louise Minchin details ‘crutch she relies on’ to do BBC Breakfast 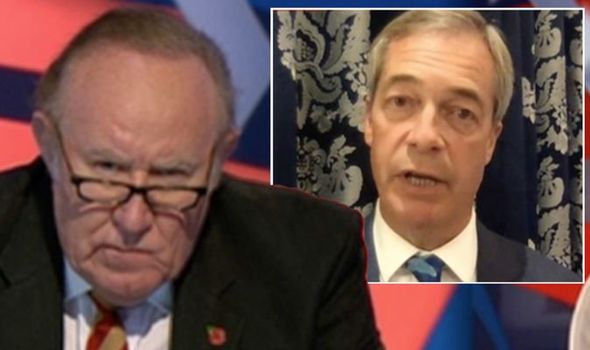 “There isn’t at the moment,” Neil hit back. “So what is the evidence of voter fraud?”

“Oh the evidence of voter fraud with postal votes is there for all to see,” Farage replied. “We know it ourselves on our side of the pond.”

“But where is the evidence in the United States of fraud of postal votes?” Neil asked.

Farage replied: “Because it’s so new it hasn’t come to light yet.”

“So there is no fraud?” Neil hit back.

“No there is no evidence of fraud at this stage but we know from countries…” Farage explained.

Interrupting, Neil continued: “But the president has claimed it’s a fraud on the American public so if there is no fraud why is he claiming there’s a fraud.

“We know from our own miserable experience of massively extending postal voting that not only is there fraud, there’s intimidation also we’ve seen it again and again,” Farage said.

“Look I think you’ve seen tonight a president who’s frustrated we haven’t got a clear result.”

“What we could be seeing is a president that’s worried when all the votes are counted he hasn’t won,” the BBC presenter said.

“Well let’s hope when all those votes are counted, they are votes cast before the polls closed and not those that came in afterwards,” Farage added.

Neil hit back: “He’s claiming he’s won on the basis the votes that are still to come in are fraudulent and you know that’s not true Nigel Farage.”

“I didn’t say it was true, did I?” Farage quipped. “I said the president was expressing frustration tonight and American states are incapable of counting votes.”