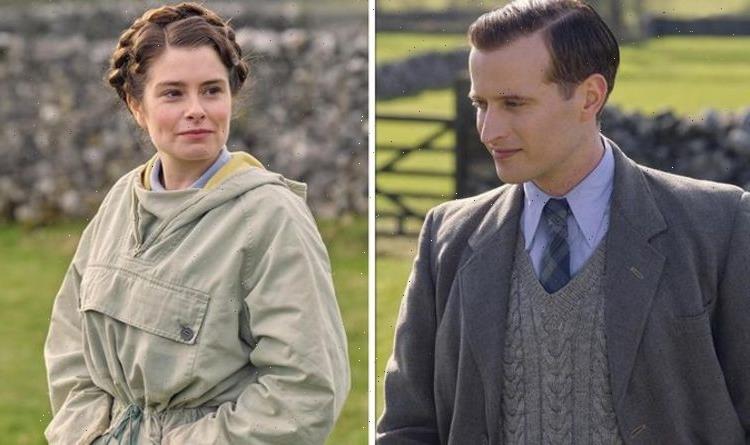 All Creatures Great and Small season two is on Channel 5 now and James Herriot (played by Nicholas Ralph) has returned to Darrowby. He experienced an awkward encounter with his love interest Helen Alderson (Rachel Shenton) when one of her family’s dogs upset some sheep. Helen star Shenton opened up about the real-life love story between James and his wife.

All Creatures Great and Small is back and fans have been looking forward to the escapist series each week.

The series is set in the Yorkshire Dales and it picks up after the events of Christmas Day when Helen was due to get married.

James had been visiting his parents in Glasgow, but felt the pull back to the Dales, despite being offered a new job back home.

This was partly due to the fact he missed Helen, who is based on the real-life wife of Alf Wight.

Helen star Shenton said she spoke to Wight’s children, Jim and Rosie, about their parents’ relationship.

She said: “Whenever we have spoken to Jim and Rosie, the main thing that they have consistently said is that their parents were completely devoted to each other.

“They would complement each other and push each other in the right direction and there was an unspoken language and understanding between them.

“Rosie also told us how they made each other laugh constantly, so Nick and I really worked on James and Helen dancing around each other and finding those ‘moments’ this series.

“It’s such a rare bond to have, so it was really important to us. I like the trajectory they take together this series, it’s a real love story that evolves over time – it’s undulating, and I hope everyone enjoys being on that journey with us.”

Findagrave.com said: “Unlike Helen, the real Joan was not a farm girl. Her family moved to Thirsk from Gloucestershire when she was 8 years old.

“She was working as a secretary at a corn mill when she met her future husband.

“Like wives of veterinarians throughout history, she often accompanied and assisted her husband in his work.”

In the series, Helen is the daughter of a farmer who is an acquaintance of Siegried Farnon’s (Sam West).

Her father has a very different way of looking at the veterinary industry and the treatment of farm animals.

In the first episode, Helen and James disagreed over an incident where one of Helen’s family dogs tormented a flock of sheep.

James went against her father’s orders to train the dog so he did not have to be put down.

They may have aired their differences, but they could not deny the fact they had both missed each other over Christmas.

Helen’s younger sister also indicated Helen had feelings for James, which is why she broke off the wedding.

Joan is believed to have been a deeply private woman, who avoided the spotlight her husband had attracted.

However, it was Joan who encouraged her husband to take up writing when he was approaching his 50th birthday.

Daughter Rosie has previously described her mother as Alf’s lynchpin, and she was his biggest fan.

Fans of the series are hoping James and Helen declare their love for one another in the latest season.

All Creatures Great and Small season 2 airs on Thursdays on Channel 5 at 9pm.