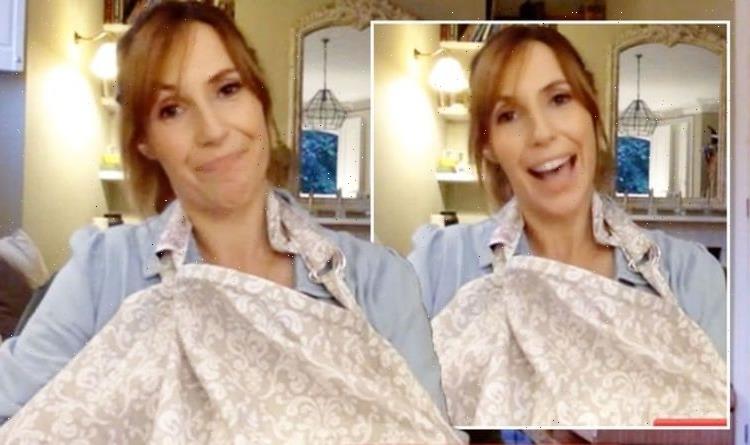 Alex Jones reveals she has a named her daughter Annie

After giving birth at the end of August, it only took one week for long-serving The One Show host Alex Jones to return to the BBC show on Tuesday to provide an update on how things have been at home. And after Alex refused to divulge the details of her baby daughter’s name on Tuesday, she returned on Wednesday now that both of husband Charlie’s parents had been informed to share the sweet news with viewers.

Alex revealed all moments after Jermaine and Sam had spoken to comedian Mo Gilligan.

Cutting to Alex, Jermaine began: “Now, we’ve just got time to visit our lovely Alex. She’s going to be telling us hopefully -“

As Alex popped up on screen, Jermaine stopped himself to say: “There she is! The beautiful Al.

“Now Al, yesterday you promised us you were gonna give us a name. Have you got a name for this beautiful child of yours?”

Alex replied: “Yes, we have her name is Annie.”

The One Show studio erupted in sounds of adoration as Alex smiled from home, with Sam commenting: “Very cute.”

Alex then was quick to joke about the fact The One Show had coincided with her daughter’s feed as she quipped: “It’s feeding time at the zoo here.”

“I can imagine,” Jermaine chipped in. “That’s just one of them! Where are the other two?

“Are they running around are they?” he asked, referring to Alex’s other children.

Not wanting to keep Alex too long, Jermaine quickly bid farewell and thanked his co-presenter for appearing on the show again.

“Thank you very much for joining us mid-feed, we really appreciate it. And that lovely Annie, look after her okay?” Jermaine signed off.

Fans at home agreed with Jermaine and Sam’s compliments about baby Annie’s sweet name, with one saying on Twitter: “Annie what a beautiful name! #TheOneShow.

“#theoneshow I’d like to congratulate Alex Jones on her new baby Annie,” a second added.