The One Show hosts Alex Jones and Michael Ball were joined by guests Billie Piper and Lucy Prebble to discuss their new Sky Atlantic show, I Hate Suzie, as well as TV chef, Hugh Fearnley-Whittingstall. The pair had a slight disagreement earlier on in the show over the term “staycation” which they both believed to have different meanings and as Michael read out some viewer’s thoughts on the matter in the closing moments, things descended into chaos, leaving them both in hysterics and struggling to finish the programme.

The presenting duo had just finished off their interview with Billie and Lucy ahead of the new series, which premieres on Thursday.

The show was just moments from coming to a close but Michael couldn’t help but read out some thoughts from BBC viewers on their earlier discussion.

“Lovely, okay so we’ve just got time for a few of your comments that have come in,” as Michael proceeded to read from his cue card.

“Karen on Facebook has said ‘My thoughts are, if you holiday in the country you live in, it’s a staycation.'” 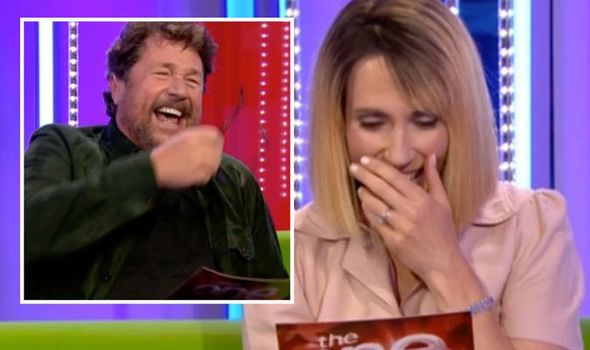 However, as Michael continued reading, he struggled to get his words out, adding: “I’m daycationing, I stayed… I don’t understand!”

The host attempted to add: “Stay at home and do day trips,” but his co-host couldn’t help but laugh as it came out muddled.

As those in the studio started laughing at the blunder, Michael let out a sigh, admitting defeat and going on to remark: “I’m good, aren’t I?”

But things continued to go off-script as Alex was left unable to speak in hysterics after Michael asked: “Did you understand a word of that?” to which she nodded in disagreement.