The cast of Absolutely Ascot have called out the “racism” they face for being gypsies during an interview on This Morning.

The reality stars who appear on the ITVBe show told Ruth Langsford and Eamonn Holmes the prejudice towards them is considered “socially acceptable”.

Samson Smith said: “Gypsies or travellers. Gypsies is normally if you’ve originated from India and that’s your background. Travellers are more Irish people that have come across from Ireland.

“We’re gypsies, but what your stereotype or what anyone would think a gypsy is, is not necessarily the case. You’re probably surrounded by gypsies every single day and you’d never even know it.

“People don’t want to be associated with gypsies or travellers – they think it’s going to put a downlight on their area and it’s modern day racism. It doesn’t get the publicity, it really doesn’t.

“We face a torrent of it every single day of our lives and in adult life, the worst thing about it is that it’s so socially acceptable to call someone a ‘pikey’ in the high street. Nothing is ever talked about.” 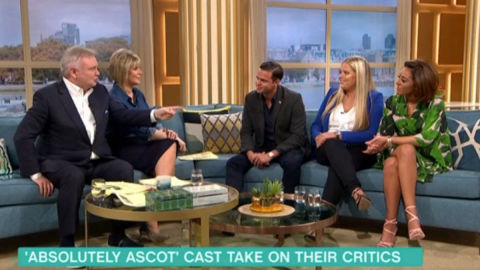 The cast questioned why the show has been compared to My Big Fat Gypsy Wedding and The Only Way Is Essex immediately. Meanwhile, the trio insisted that the programme isn’t scripted when asked about comparisons to TOWIE.

Courtney Smith said: “What you see is what you get. Everything you see on there is my real life. Nothing on there is scripted.”

This Morning continues weekdays from 10.30am.

Absolutely Ascot continues at Sundays at 10pm on ITVBe.