Halloween comes with a wide array of spooky programming, ranging from the truly hellish offerings on Netflix to Syfy’s campy slasher flicks. Families can sample a dark kiddie anthology series or a gothic cooking show with a talking mummy cat. And for those who want to learn more about things that go bump in the night, AMC will dig into the history of horror on screen with filmmaker Eli Roth.

Check out IndieWire’s guide to all the terrifying TV this month:

”Into the Dark” (Hulu)
This new anthology series by Blumhouse’s Jason Blum presents a holiday-themed horror movie each month. In the inaugural installment, “The Body,” hitman Wilkes (Tom Bateman) has four hours to dispose of his latest victim’s body, which he has wrapped in plastic (naturally) and is dragging through Los Angeles. The only problem is that it’s Halloween night, the streets are packed, and no one takes Wilkes seriously, believing him to be just one more over-invested cosplayer. Rebecca Rittenhouse, Aurora Perrineau, and David Hull also star, with a cameo by John Landis.

”Creeped Out” (Netflix)
This British-Canadian anthology series is like a “Black Mirror” with dark magic for tweens, and puts a twist on kids’ greatest fears, whether it’s discovering the weird neighbor lady’s dark secret or dealing with a cell phone with a mind of its own. Each story is connected by a guy with a blank mask called The Curious, who gathers strange tales.

”Malevolent” (Netflix)
Brother-sister scam artists convince the bereaved that Angela (Florence Pugh) can speak to the dead. When Mrs. Green (Celia Imrie) calls the paranormal investigators to her home — which was once an orphanage where young girls were murdered — the siblings realize what a true haunting looks like.

”Supernatural” (8 pm, The CW)
The series kicks off its 14th season of demon-hunting and the politics of heaven and hell with Sam (Jared Padalecki) searching for his brother Dean (Jensen Ackles), who could be anywhere in the world — or beyond it.

”The Curious Creations of Christine McConnell” (Netflix)
“Pee-Wee’s Playhouse” gets a gothic twist with this bizarre cooking show starring YouTube sensation Christine McConnell, who creates spooky baked goods while engaging in shenanigans with her puppet friends, one of whom is a mummified cat.

”Apostle” (Netflix)
In this harrowing film set in 1905, Thomas Richardson (Dan Stevens) infiltrates a religious cult on an island after he learns his sister has been taken hostage. There, he discovers that behind the charismatic prophet Malcolm (Michael Sheen) and the society’s idealistic teachings, lies an evil secret. From director Gareth Evans (“The Raid”).

”Errementari: The Blacksmith and the Devil” (Netflix)
In the film, based on Basque folklore, a young girl named Usue goes missing; this causes a frenzy in her town, who suspect the local blacksmith of foul play. But it’s the blacksmith who is Usue’s best chance of defeating the devil himself.

”Light as a Feather” (Hulu)
Peyton List leads a cast of five popular teenage girls who play the party game, Light as a Feather, Stiff as a Board, in which each girl is told how they’ll die before attempting to lift them. But when the girls start dying one by one in the exact manner that was predicted, the clock is ticking to find who or what the killer is before no one is left.

”Cucuy: The Boogeyman” (7 pm, Syfy)
A teenage girl discovers that the urban legend of El Cucuy, the Mexican boogeyman, is true when she’s confined to her home on house arrest. Marisol Nichols (“Riverdale”) stars alongside Brian Krause (“Charmed”).

”The Sinister Surrogate” (8 pm, Lifetime)
The seemingly perfect Kailee gives birth to a beautiful baby girl for grateful couple Josh and Danielle, who soon discover that becoming parents this way may come with a price. 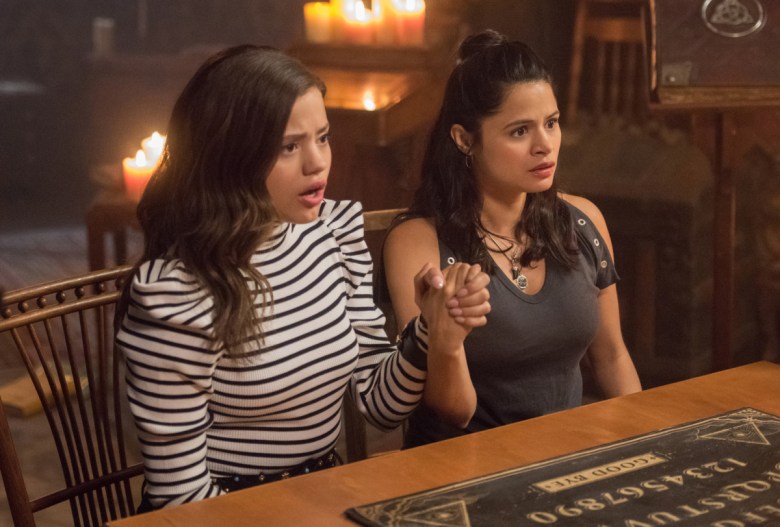 ”Charmed” (9 pm, The CW)
Sisters Mel and Maggie discover that their mother, who was killed by a demonic force, gave birth to another daughter, Macy. After the three siblings move into the same house, each starts to exhibit some sort of magical ability: Macy has telekinesis, Mel can freeze time, and Maggie can hear thoughts. It turns out that they’re The Charmed Ones, a powerful trio of witches who vanquish demons. A reboot of the WB series that ran 1998-2006, this one comes from the creator of “Jane the Virgin.”

”Terror in the Woods” (8 pm, Lifetime)
Lifetime enters the fray with their fictionalized take on the Slender Man stabbings in which two 12-year-old girls stab a classmate in the woods in order to impress a malevolent being.

”Constantine: The Legend Continues” (9 pm, The CW)
NBC may have canceled “Constantine,” the adaptation of the comic book about British exorcist and occult detective John Constantine (Matt Ryan), but The CW resurrected him in animated form.

”Haunted” (Netflix)
The executive producers behind “The Purge” and “Lore” take their terrifying tale-spinning to Netflix for cinematic reenactments of real-life, first-person accounts from people who’ve experienced horrifying, strange, or supernatural events and other inexplicable phenomena.

”Lore” (Amazon)
The horror anthology series based on at the podcast of the same name returns for a second season of blood-curdling true tales from history. Among this season’s six tales is an account of the Hungarian countess Elizabeth Bathory — who tortured and killed possibly hundreds of young girls — and the tale of two grave robbers who sold bodies to doctors and then decided to boost their business by murdering people directly.

”Killer High” (9 pm, Syfy)
In this horror-comedy, Sabrina (Kacey Rohl of “The Magicians” and “Hannibal”) has planned the perfect high school reunion. But a giant tusked monster crashes the party and keeps killing all the guests.