90 Day Fiancé stars often head to social media to connect with fans and build a platform after (or even during) their time on TLC.

We’ve gathered a list of over 50 90 Day Fiancé couples’ and cast members’ YouTube channels so you can start subscribing—and even get some behind-the-scenes scoop. 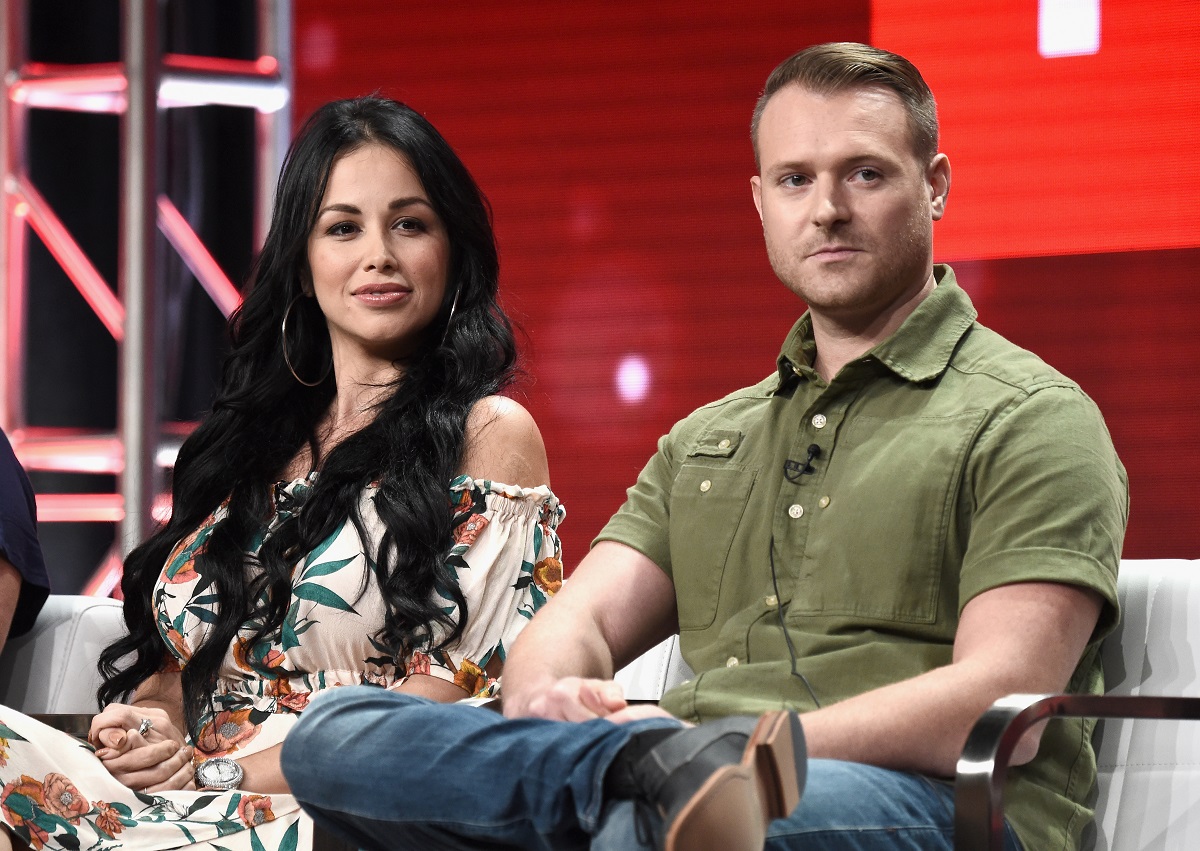 Rosemarie Vega, a 24-year-old single mom, became a fan favorite cast member on 90 Day Fiancé: Before the 90 Days when she famously dated Big Ed Brown. Rose has since launched her own YouTube channel, which includes an inside look at her life in the Philippines.

Big Ed has one of the more notorious reputations—and YouTube channels—within the 90 Day Fiancé cast. In addition to mukbangs, ASMR, Q&As, and merch reveals, Big Ed of 90 Day Fiancé: Before the 90 Days also has his own original song (written and recorded by Jason Bohn)—“This Is Big Ed.”

Andrei Castravet and Elizabeth Potthast Castravet of 90 Day Fiancé and 90 Day Fiancé: Happily Ever After launched a YouTube channel in early 2020. So far, their channel has featured workouts from Andrei, recipes from Elizabeth, and a Q&A with the couple.

A post shared by Elizabeth Potthast Castravet (@elizabethpotthast) on Jul 26, 2020 at 7:44pm PDT

Stephanie Matto was popular on YouTube (now with over 300,000 subscribers) before she ever dated Erika Owens on 90 Day Fiancé: Before the 90 Days. She’s uploaded videos about her time on the show, as well as her work as an OnlyFans content creator and her rare diagnosis of aplastic anemia.

Today’s truth is that we drove up a mountain instead of climbing it because 2 out of the 3 of us are not in great shape 😂❤️👏 bonus points if you can guess which 2 it is. 😜 #ootd #photooftheday #daytrip #dogmom #familyphoto #instagood #vermont #equinoxmountain

Anfisa Arkhipchenko Nava, a model from Russia, married Jorge Nava on 90 Day Fiancé. Their marriage didn’t end well, but Anfisa’s career as a personal trainer did. She’s shared videos about her personal life, as well as workout and fitness tips.

Since breaking things off with Anfisa and getting out of federal prison after a marijuana-related charge, Jorge launched a YouTube channel of his own. So far, he’s shared a few short interviews about his time behind bars.

Who could forget Usman Umar’s, aka Sojaboy’s, famous song for Babygirl Lisa Hamme? Thankfully, you don’t have to; in fact, you can listen to it as much as you want on his YouTube channel. (Just don’t hold me responsible if Babygirl Lisa hears you humming it…)

After Paola Mayfield married Russ Mayfield on 90 Day Fiancé, she became a fitness coach and personal trainer. So her YouTube channel, of course, focuses on diet, nutrition, and workouts.

Paul Staehle and Karine Martins Staehle have had a more tumultuous relationship than ever in recent weeks. But their YouTube channel features inside looks at their life—like the birth of their son, Pierre—in happier times.

Varya Malina, Geoffrey Paschel’s Russian ex-girlfriend, has one of the juicier 90 Day Fiancé YouTube channels. She uses her channel to open up about her time on the show, including the inside scoop about TLC’s editing.

Geoffrey of 90 Day Fiancé: Before the 90 Days is just about as open as his ex, Varya, on YouTube. In addition to personal vlogs, workouts, and recipes, Geoffrey uploads live interviews with fellow cast members and uses his channel to respond to the many allegations against him.

Fernanda Flores, Jonathan Rivera’s ex-wife from Mexico, is now a model and social media influencer in Chicago. Her most well-known video on YouTube, “My Truth,” is a 45-minute candid look at her divorce from Jonathan from her perspective.

Kalani Faagata and Asuelu Pulaa of 90 Day Fiancé and 90 Day Fiancé: Happily Ever After share details about how they met and fell in love in Asuelu’s home country of Samoa on their YouTube channel. They also upload Samoan cooking tutorials, baby updates, and family vlogs.

David Toborowsky and Annie Suwan Toborowsky were a controversial couple at first, but they’ve since become fan favorites on social media and 90 Day Fiancé: Pillow Talk. On their YouTube channel, the couple shares Annie’s favorite recipes from Thailand, as well as global travel vlogs.

Jon Walters and Rachel Bear Walters share travel vlogs and long-distance relationship tips on their YouTube channel, in addition to answering 90 Day Fiancé fans’ questions from time to time. They also “shoot the breeze” together about eclectic topics, like UFOs, ghosts, and animal testing.

Tim Malcolm first dated Jeniffer Tarazona on 90 Day Fiancé: Before the 90 Days and later went on to star on 90 Day Fiancé: Pillow Talk with his ex and co-parent, Veronica Rodriguez. His YouTube channel is low-key, focusing mostly on gaming.

Tim’s ex Jeniffer, a model and mom from Colombia, has a small YouTube channel of her own. She has only two videos on her channel so far, including one skincare routine tutorial.

Jenny Torres Passariello, from the Philippines, and Larry Passariello of 90 Day Fiancé: Before the 90 Days have their own active YouTube channel. Jenny and Larry often talk about cultural differences and Jenny’s move to the U.S. in their videos.

Rebecca Parrott got engaged to her younger man, Zied Hakimi, of Tunisia on 90 Day Fiancé: Before the 90 Days. She’s shared wild stories from her time as a private investigator, as well as makeup routines and even one video about her life with Zied.

Laura Jallali became a highly controversial cast member after she married (and divorced) Aladin Jallali of Qatar on 90 Day Fiancé: The Other Way. Her YouTube channel focuses mostly on family life and recipes—including her famous homemade wine, which Aladin wasn’t too happy about her preparing behind his back.

Evelyn Cormier of New Hampshire continued her professional singing career after marrying her Spanish beau, David Vázquez Zermeño, on the fifth season of 90 Day Fiancé. Her YouTube channel is purely for her music.

Yamir Castillo of Nicaragua and his 90 Day Fiancé other half, Chelsea Macek, ultimately divorced in 2017. But Yamir and Chelsea’s relationship lives on on his music YouTube channel, where she starred with him in the music video for his single “Party Love.”

Leida Margaretha of Indonesia and Eric Rosenbrook quickly became one of the most controversial couples in 90 Day Fiancé history. Leida’s channel focuses on her work on OnlyFans, in-depth life and marriage updates, livestreaming, and cosplay.

Alan Cox and Kirlyam Cox (from Brazil), now parents to their young son Liam, were featured on the very first season of 90 Day Fiancé. Kirlyam’s channel includes baby, parenting, photoshoot, and pregnancy vlogs, as well as joint videos with Alan about their love story and their time on reality TV.

Blake Abelard, a music producer from California, married Jasmin Lahtinen from Finland on the seventh season of 90 Day Fiancé. Blake and Jasmin are still together, and they talk quite a bit about the show on their joint YouTube channel—including Q&As with fans, live episode reactions, and interviews with family members (such as Blake’s mom) who appeared on the show.

Brett Otto and Daya De Arce of the Philippines have been married for several years and had a daughter together since first appearing on 90 Day Fiancé. Their joint YouTube channel features family vlogs about quarantine and the coronavirus, their love story, and how they met.

Evelin Villegas of Ecuador and her future husband, Corey Rathgeber, first starred on 90 Day Fiancé: The Other Way together. Now, Evelin and Corey are both active on social media, including Instagram and OnlyFans. Evelin’s YouTube videos focus on OnlyFans tips for aspiring content creators. There’s also a behind-the-scenes video on how she met Corey.

Steven Frend and Olga Koshimbetova were a highly controversial young couple (and new parents) on the sixth season of 90 Day Fiancé. They’ve since appeared on 90 Day Fiancé: What Now and started working as professional photographers. Their YouTube channel only includes only vlog so far—from Russia, Olga’s home country.

Josh Batterson and his wife, Aika Batterson, from the Philippines, tied the knot in Las Vegas on the fifth season of 90 Day Fiancé. Josh and Aika’s YouTube channel includes a few quirky adventure travel vlogs.

90 Day Fiancé: The Other Way star Tiffany Franco Smith, wife of Ronald Smith from South Africa, recently started her own vlog and beauty tutorial YouTube channel. She’s a professional makeup artist, so her channel will likely continue to focus on beauty routines.

Juliana Custodio Jessen, a professional model from Brazil, married Michael Jessen, a wine entrepreneur from Connecticut and divorced dad of two, on the seventh season of 90 Day Fiancé. Juliana’s YouTube channel include lifestyle and beauty tips, Brazilian recipes, Juliana’s life story, and couple’s videos about her relationship with Michael.

90 Day Fiancé: The Other Way star Biniyam Shibre, Ariella Danielle’s future husband and the father of her child, is a professional dancer and choreographer in his home country of Ethiopia. His channel features clips of Biniyam dancing, fitness training, and MMA fighting.

Akinyi Obala of Kenya and her future husband, Benjamin Taylor, first appeared on 90 Day Fiancé: Before the 90 Days and have since been featured on 90 Day Fiancé: Self-Quarantined. Akinyi’s YouTube channel focuses on business tips, entrepreneurship, workouts and fitness, and life in Kenya.

Deavan Clegg, a model from Utah, married Jihoon Lee of South Korea on 90 Day Fiancé: The Other Way. The parents of two share life updates, family vlogs featuring their kids, and live reactions to the show on their YouTube channel.

Anna Campisi, a mom of three from Nebraska, and Mursel Mistanoglu of Turkey married on the seventh season of 90 Day Fiancé. Anna and Mursel’s channel focuses on their shared passion and business: beekeeping.

Her YouTube channel features original music she performs with her sister Stacey, as well as videos about her “mommy makeover” and plastic surgery.

Jesse, Darcey’s ex, is a model and aspiring entrepreneur from the Netherlands. His YouTube channel focuses on glamorous travel vlogs, but he also uploaded a tell-all interview with Caesar Mack’s Ukrainian ex, Maria.

Before Palm Beach, FL rapper and model Brittany Banks got engaged to Yazan Abo Horira of Jordan on 90 Day Fiancé: The Other Way, she was already popular on social media. Her channel focuses on cosmetic procedures, lifestyle tips, beauty hauls, and fitness.

Ashley Martson Smith and her Jamaican husband, Jay Smith, are back “on” after several breakups along the way.

Their YouTube channel only boasts one video so far, but it’s juicy—including an inside look at their separation and why they ultimately decided to stay together.