Nowadays we’re all used to our TV shows being inspired by or based on true stories: A Very English Scandal, American Crime Story, The Crown, the list runs long.

But there are some fictional series out there that have, for the occasional episode, dipped into real-life events for inspiration, too.

This lot delved rather surprisingly into reality for some of their best-known and most-loved episodes.

1. Doctor Who, ‘The Unicorn and the Wasp’ 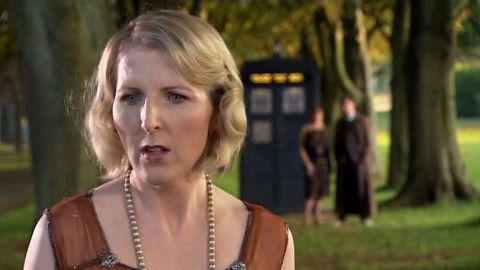 The 2008 outing for David Tennant and Catherine Tate as the Doctor and Donna in the hit BBC sci-fi show featured Agatha Christie as the lead character. After an encounter with a giant space wasp, the writer suffered from amnesia and went missing for 11 days.

This (her going missing with amnesia, we can’t confirm the giant space wasp) is based on real-life events which sparked a 1,000-strong police manhunt for the author, who turned up in a Harrogate hotel 11 days after she went AWOL.

To her death, Christie never spoke about what actually happened.

One of the show’s early episodes saw the boys on a jaunt to popular theme park Thorpe Park.

The show cranked up the awkward-o-meter when Will unwittingly shouted at a Down’s syndrome child sitting at the front of the park’s flagship rollercoaster, Nemesis Inferno.

You may have thought (hoped) this was fairly unbelievable… well, no. According to star Simon Bird, this skin-crawlingly cringe moment actually happened to one of the writers.

Like many moments in the US sitcom, this was based on a real person and an incident that occurred in New York City.

The titular character of the 1995 episode was based on an actual soup vendor, Ali “Al Yeganeh”, dubbed “The Soup Nazi” due to his treatment of customers. It was pitched by writer Spike Feresten and the sitcom’s creators, Jerry Seinfeld and Larry David, loved it immediately.

One of the show’s most memorable eps, it also included the oft-repeated catchphrase, “NO SOUP FOR YOU!”

Fact fans may also note that the 1993 movie Sleepless in Seattle also mentions the “meanest man in America” who makes the “greatest soup you have ever eaten”.

4. Only Fools and Horses, ‘Yuppy Love’

David Jason’s celebrated pratfall through the wine bar’s serving hatch from 1989 is probably the moment from the long-running and much-loved BBC One sitcom that audiences remember most.

Creator John Sullivan was inspired to write the scene, where Del Boy leans back casually only to find the bar flap open, when he witnessed the very same thing happen in a pub.

He told BBC Four’s Front Row in 2010: “I actually saw it happen many, many years prior in a pub in Balham where I lived. I saw a guy do exactly that. In fact he leant away from the flap to get a light from a friend’s lighter and the guy came out and left the bar and he just went through it.”

Sullivan added: “I’ll use that sometime if ever I become a professional writer.” And just as well he did!

We suspect this iconic moment may get replayed in the forthcoming Only Fools and Horses musical.

5. The X-Files, ‘The Erlenmeyer Flask’

Prepare to be grossed out. The show’s first season finale saw Mulder and Scully investigate a woman with poisonous gas inside her body – and when paramedics perform a needle decompression, the gas is released and knocks people unconscious.

Too X-Files to be true? That’s a negative.

In the same year the episode was broadcast, a woman had blood drawn in hospital and then a noxious ammonia-like smell emanated from her body – causing all the ER staff to fall ill. Her ‘toxic blood’ was never precisely determined but it was thought she had been using chemicals as part of a home remedy.

So, not aliens then.

The new police procedural from Ryan Murphy, Brad Falchuk and Tim Minear debuted earlier this year and caused quite a splash with its increasingly outlandish emergencies.

One in particular, during the pilot, saw a stoner phoning 911 and claiming he could hear a baby crying in his apartment’s walls. Despite incredulous looks all round, it turned out that a baby was indeed in the pipes – another resident of his building had given birth and accidentally flushed it down the toilet.

In reality, this sadly happened to a woman in China – but thankfully the baby in question survived and was cared for. Murphy heard about the story from YouTube and decided to include it on the show.

Although the Netflix show is a fictionalised account of the characters and shenanigans of the Gorgeous Ladies of Wrestling in the 1980s, there are some episodes which replicate real-life events.

Take this season two one, where the gregarious gang film a Public Service Announcement (or PSA) on teenage pregnancy to boost their image.

As you can see above, the actual GLOW ladies shot a PSA, too – this one warning against the perils of drinking and driving.

8. Modern Family, ‘Caught in the Act’

This season-two episode featured a moment dreaded by most parents around the world. Claire and Phil Dunphy were enjoying some special adult bed-based fun-times when their children walked in on them – hence the title.

Series co-creator Steven Levitan was inspired to write the storyline after his own daughter did the very same thing, catching them having sex. Luckily no-one’s mentally scarred for life by that, are they?