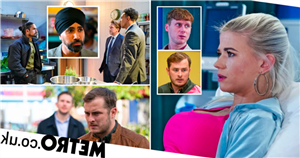 EastEnders might have concluded for another week but don’t fret – get a first look at next week’s unmissable week in Walford via our action-packed picture gallery.

Lola Pearce (Danielle Harold) helps Lexi get ready for the pageant, with Felix Baker (Matthew Morrison) offering to fix her dress for her.

Things take a turn for the worse, as Lola collapses due to a seizure, and after a CT scan, she’s told that she has a tumour which may be cancerous.

How will she react to the upsetting news?

Stacey, however, tells Kheerat that Ravi tried to kiss her, and he sees red. The two men subsequently come to blows, as their fight spills outside.

Ben Mitchell (Max Bowden) has some bad news, which he opens up to Callum Highway (Tony Clay) about.

But just what has he learned?

EastEnders airs these scenes w/c Monday October 24 on BBC One.