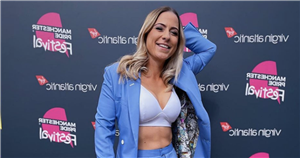 Lucy Spraggan instantly won the hearts of the nation in 2012 after taking to The X Factor stage, auditioning with her own single, Last Night.

Now, nine years after bursting onto the scene, it has been announced that the ITV talent show that has launched the careers of Lucy, Leona Lewis, One Direction and Little Mix to name a few, has come to an end.

The once-mighty show, headed by Simon Cowell first aired across the nation in 2004 and has gone on to produce 15 winners.

But while artists may have once inspired to become the next member of The X Factor club, there have been calls for a much-needed change in the music and entertainment industry.

Speaking exclusively to Daily Star fresh from her set at Manchester Pride, Lucy said: "I think it's time for a shake up, it has been for a while.

"TV is a massive thing to utilise, I just really hope they're looking after people and I believe they are, I've spoken to a few people.

"I think any new show that's coming on, they're going to be looking after a lot of people."

In recent weeks, fellow X Factor alumni, Rebecca Ferguson, has been campaigning for a music industry watchdog after claiming that some artists are being exploited.

"There should be an ombudsman for every industry, you're not protected in this – there's a musicians union but it's a union, it's not protection, there is no-one," said Lucy.

"Playing at half four in the afternoon at Manchester Pride, that I've played for maybe 11 years, I've played the Academy when I've played here, that's three and a half thousands people."

Lucy went on to add: "My album was just number five, being a woman in this industry, it's sh*t."

Opening up about sexuality no longer being a taboo subject with songwriters, she explained: "People are more comfortable but it's because of the people before trailblazing, they've opened the door for us.

"I've been out since I was 14 and I feel like the industry definitely takes you less seriously, I know that from across festivals."

Explaining in further detail, the Buxton native added: "I was, as far as I know, the first UK open lesbian to have a top ten album in the last 20 years, the last was Alex Parks from Fame Academy in 2003.

While Lucy made history in 2013 with her second studio album, Join the Club, she has since gone on rack up a further four top 20 albums, with her most recent, Choices, also being her most honest.

Reflecting on her album, Lucy said: "It just felt right, I've had a weird couple of years, I've changed pretty much everything about myself, it was just a natural thing."

She expanded: "I tell peoples stories and the one I know most is about me, it's like hitting a certain low and turning it all around."