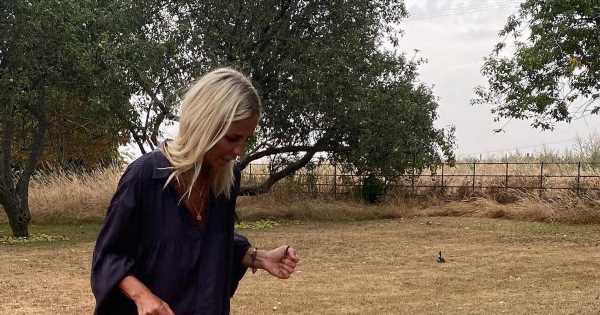 Ulrika Jonsson has introduced her loyal legion of fans to a new member of her family in an adorable online post.

On Sunday (August 22), the Swedish-British model took to Instagram to share her new furry friend – a puppy named Hank – with her 202k followers alongside a carousel of sweet snaps.

The TV personality could be seen cuddling the weeks old English Bulldog pup as he snuggled into the cruck of her arm while they posed up a storm in her sprawling back garden.

And it was clear to see the tiny tot had been more than welcomed into the Jonsson household as she shared some incredibly cute pictures of the ball of fluff with her children.

Alongside the heartwarming pictures, the Gladiators presenter shared her reason for purchasing the little dog rather than fostering him like she has done with many of her previous pups.

She shared her reasons behind this decision as she posted the lengthy snap online, which read: “This is Hank Winston Monet. He arrived a week ago.

“Those of you who know me, know I've fostered and adopted before. And I will do so again. I continue to support @theedwardfoundation.

She went on to reassure fans that she will continue to foster dogs in the future but made the decision to buy her four-legged friend outright.

Ulrika added: “I know getting a puppy isn’t popular with many. Hank came into my life somewhat unexpectedly and serendipitously.”

“Adoption will be a part of my life again at some point but this was right for me now.

“Welcome Hank. Leo is being incredibly patient like the king he is. (Hank has got Winston as his middle name in tribute to our late friend @winstonandbentley [love heart emoji]).”

The mum-of-four made sure to turn off the comments on her controversial post as the family enjoyed the first few weeks with little Hank without any hateful comments from trolls online.

It comes after the TV presenter celebrated her 55th birthday as she shared a black and white topless snap to her adoring fans on social media.