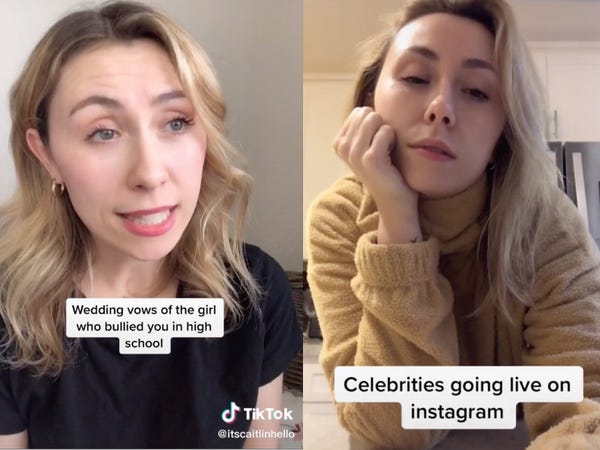 Caitlin Reilly has a knack for impersonating "problematic individuals."

Over the last 6 months, the 30-year-old actress and comedian has become a staple on TikTok with her impressions of your least favorite people, from "the WASP mom" to "the girl who bullied you in high school."

Her videos frequently go viral, racking up millions of views each, and she has won praise from internet personalities like James Charles and Colleen Ballinger who delighted in the painful and hilarious accuracy of her content.

Reilly initially downloaded TikTok in February and thought she'd use it to amuse herself during quarantine. At the time, none of her friends used the app, so she felt free to experiment with her content.

"I had no real plan, but it felt like this little secret place where I could record videos," she told Insider. "I could just post videos and do these characters with no judgment."

Her anonymity on the app didn't last long — and now she has 1.2 million enthusiastic followers

Unprecedented circumstances during a pandemic provided inspiration for some of Reilly's characters, like "the coworker you hate during a Zoom meeting." The video, which has been viewed nearly 5 million times, resonated with the exasperated work-from-home crowd.

"I am TRIGGERED," one commenter wrote.

"I don't even understand how someone can be this good at acting," another said. "She's on a different level."

Some of Reilly's characters are inspired by her experience growing up and working in Los Angeles. For several years, she assisted clientele in her family's store on Larchmont Boulevard — and the customers, she says, inspired her "WASP Mom" impression (a fan favorite).

"A lot of the people that would come in would be, you know, super affluent, upper-middle-class, high-maintenance women," she recalled. "So I really tried to channel that."

"I'm convinced you've been this woman in a past life," one commenter wrote on a "WASP mom" video that has racked up over 6 million views. "You are WAY too good at it."

"Cringe is very popular these days. I've gotten a lot of comments on videos where people have said I've activated their flight or fight — or that I'm really good at portraying characters that people hate," she said. "I guess as vengeance I make fun of them in a character."

Reilly says she takes pride in portraying a range of characters, not simply the objectionable coworker or mother.

"Women are such beautiful, complex beings," she said, "and we have such range in the way in we approach things, so I think there's a lot of material there."

Her personal favorite character is the charismatic and melodramatic "lounge singer."

After watching the lounge singer in the movie "Lost in Translation," Reilly felt inspired.

"The lounge singer is just so funny to me," she said. "So that ended up being my best video."

Reilly says her viral fame was unexpected, but she's looking to make the most of the opportunity

"It's still so surprising to me when videos take off like that because I'm just setting up my camera in my living room and just acting a fool. Then I'll post it and walk away from my phone and carry on," she said. "And then I check my phone and all of a sudden I'm getting all of these messages."

After pursuing acting opportunities in Los Angeles and studying at The Groundlings improv school, she's hoping her TikTok videos will open doors for representation and future roles. Eventually, she says, she'd like to write her own show (perhaps something "a fraction as good as 'Fleabag'").

In the meantime, Reilly is fielding audience requests for more content (the comments sections of her videos are flooded with demands).  Requests range from the general — "plz make a video where you say 'absolutely'"  — to the very specific — "Please show us WASP mom booking a beach house for two families needing three parking passes."

"I want people to watch it and almost hate it because it's a good interpretation, you know?" she said. "That's kind of cool."