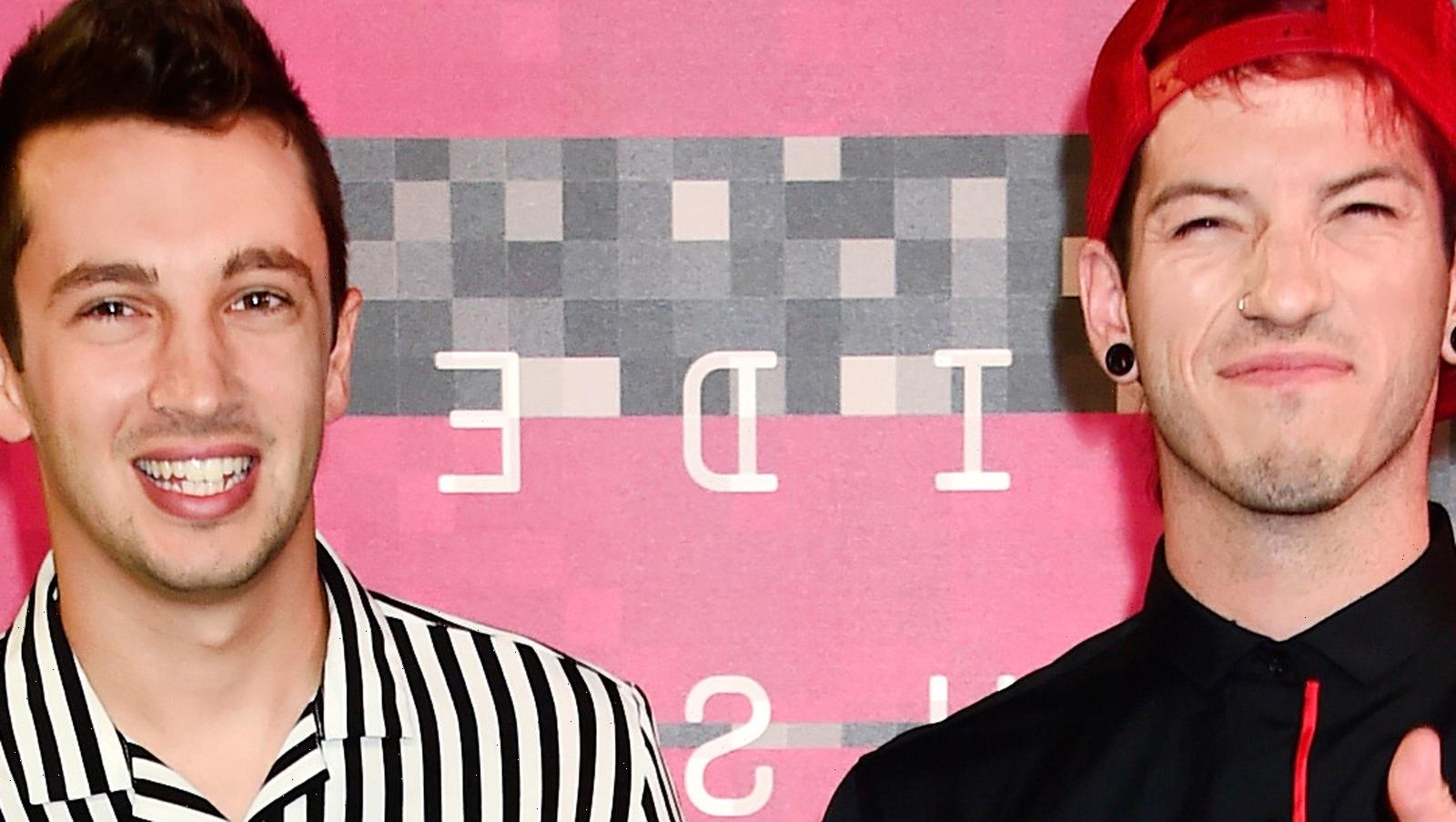 On May 21, 2021, twenty one pilots released their sixth album, “Scaled and Icy,” along with a livestream event where they performed songs from their new album and hits from their prolific career, per Billboard. It’s safe to say that the hype for the new album is strong, and fans took to social media to express their excitement for the new record. Before the album release, twenty one pilots released three singles from the album, most recently a track entitled “Saturday,” which debuted on May 18 (as seen on their official Instagram account).

“Scaled and Icy” is an 11-track album, as detailed by Billboard, and was produced differently from their other records, due to the coronavirus. Twenty one pilots consists of Tyler Joseph and Josh Dun; Joseph and his wife Jenna live in Columbus, Ohio, but Dun lives in Los Angeles, noted Rolling Stone. So recording together would have been a challenge during the pandemic. Therefore, “Scaled and Icy” is “a collection of songs that push forward through setbacks and focus on the possibilities worth remembering,” a press release for the album stated (via Billboard). Joseph wrote and produced the majority of the album, and Dun engineered the drum tracks from his home studio.

While the creation of “Scaled and Icy” shows how talented these two musicians are, twenty one pilots is still somewhat an enigma. Just who are the men that make up this undefinable band? Keep scrolling to discover the untold truth of twenty one pilots.

Twenty one pilots was originally a trio

Twenty one pilots currently consists of Tyler Joseph, lead singer and keyboardist, and Josh Dun, who plays the drums. However, fans might not know that Dun wasn’t a founding member of the band. In fact, twenty one pilots was originally a trio.

The band was formed in 2009 at Ohio State University by Tyler Joseph and his two friends, Chris Salih and Nick Thomas, per Dispatch. At first, the band just included Salih and Joseph, but they soon added Thomas (Joseph’s high school friend) when they thought they needed another instrument to round out their sound. From there the trio soared. They independently produced their first album, the self-titled “twenty one pilots,” and embarked on a “performance strategy that prepped [them] for takeoff,” Dispatch wrote.

They went on a regional tour and focused on venues outside of their Columbus hometown. “I fully believe that’s what set us apart from other local bands,” Salih said, via Dispatch. “We didn’t want people to use the excuse of ‘We can go see them next week.’ We wanted them to wait a few months.” And although they were successful, in 2011, both Salih and Thomas left the band, Thomas to return to college and Salih to repay his student loans. “For me to continue playing in Twenty One Pilots would have been a middle finger to my parents,” Salih said in a statement (via AltPress). He recommended Dun, his Guitar Center coworker, as a replacement, and the rest is history.

Twenty one pilots' band name is a literary reference

One of the many questions twenty one pilots often gets seems to be how they came up with their name. There’s a lot about twenty one pilots that defies expectations, from their antics on stage to their costumes and makeup during performances to their genre-defying music, but their name might be one that has a lot of casual fans scratching their head.

It turns out, twenty one pilots is a reference to an Arthur Miller play, “All My Sons,” that Tyler Joseph read while attending Ohio State University, per Rolling Stone. The play is about a contractor in World War II who sent faulty parts overseas to soldiers, resulting in the death of 21 pilots, and his fear that he’d lose money if he admitted to his failures. “I could relate to the fact that making the right decision in life sometimes takes more work,” Joseph said to Rolling Stone. “It takes more time, and it can feel like you’re going backward.”

The name has become sort of a philosophy for Joseph and Josh Dun, who never take the easy way out when it comes to the band. This can be seen in a variety of their choices, like turning down sponsors for their tour and continuing to go around the country in a van instead of a tour bus long after they could sell out arenas. They also courted numerous record deals before settling on the one that fit them.

Twenty one pilots got their start playing around their hometown of Columbus, Ohio, and relied on guerilla marketing to get the word out. When they first started out, they kept an active presence on social media, per Dispatch. They also hired a videographer to document their growing popularity. “They get the importance of how easy it needs to be (for fans) to get ahold of content,” their videographer said to Dispatch in 2012. However, they avoided “excessive promotion” and only performed a few times in Columbus, relying on word of mouth to get people to come to their concerts. “There’s something so much more powerful about when someone takes it upon themselves to share,” Tyler Joseph said to Dispatch. “We’d play in front of five people — and those people told five people.”

Meanwhile, Joseph would drive around Columbus handing out tickets for their earliest shows, reported Rolling Stone. They then transitioned to sitting outside of a Chick-fil-A, giving tickets to those who wanted them. Joseph’s mom also got involved, trying to give tickets to Ohio State students.

The efforts paid off, and twenty one pilots sold out large arenas in the Columbus area, “an unheard-of accomplishment for an entirely independent local band,” Columbus Alive reported. Those shows attracted the attention of record labels, though the duo took their time deciding who to sign with, producing two albums independently prior to joining a record label.

Tyler Joseph and Josh Dun's faith plays into their personas

Both Tyler Joseph and Josh Dun come from conservative religious households. Joseph’s father was the principal of the Christian high school Joseph went to, and prior to that, he was homeschooled by his mother. She was strict, making him complete basketball drills daily before he could come inside for dinner, reported Rolling Stone. Things were even more conservative at Dun’s house. He wasn’t allowed to listen to rock or hip-hop albums, and he had to watch movies via CleanFlicks, a service that censored any sexuality, violence, or profanity from box office hits. That led to some aggression on his part, though his parents eventually let up a bit and allowed him to assemble a drum kit in the basement.

However, those Christian upbringings have grounded both Joseph and Dun. Joseph still lives in Columbus, Ohio, with his wife, and Dun’s childhood home (where his parents still live) was the setting for the music video of their breakout hit, “Stressed Out,” per Rolling Stone.

Joseph told the publication that he wanted to start a charity, something “Columbus-based,” with the money he’s made, but he kept quiet about it until 2020, when he spoke out about its existence in an apology for an insensitive remark he made. During a charity livestream “Fortnite” tournament on Twitch, Joseph shared, via NME, that he created a non-profit organization to help low-income Ohio children. The charity is ongoing and helps connect kids to coaches and sports opportunities.

Twenty one pilots' music defies genre — and they're okay with that

One of the biggest lessons Tyler Joseph said he learned when he first formed twenty one pilots was to ignore the restrictions genre would put on their music. Their second big hit after “Stressed Out” was a song entitled “Lane Boy,” where Joseph sang “They say, ‘Stay in your lane, boy’/But we go where we want to,” via Rolling Stone. Those lyrics were intentional, as Joseph realized that he wanted to create genre-defying music. “It is true that if you hear our music described, it sounds unappealing,” he told Rolling Stone. “I used to laugh and agree with people when they said it didn’t make any sense. I’m going to stop doing that. It fits together because we made it.”

Looking at the description of twenty one pilots’ music when they first became big shows just how hard it is to put them in a box. According to Columbus Alive, twenty one pilots “boldly and shamelessly [traverses] genre boundaries, melding emo-inspired classic rock, synth-driven club music … nerd rap and whatever else strikes their fancy.” Joseph told the publication that he wanted “to write songs that I wish other people were writing.” And he thanks his younger brother for giving him the confidence to rap if he wanted to, allowing him to create his own, unique sound.

That genre-blending seems to continue in their sixth studio album, “Scaled and Icy,” whose singles have already topped the charts and wowed their ever-growing audience.