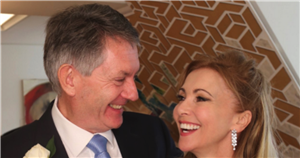 The blushing bride confirmed the happy news on Sunday as she shared a snap from the big day on Twitter in view of her thousands of followers.

Emma, 61, penned alongside a snap of the new husband and wife: "Yesterday was a very good day."

Emma could be seen glowing in a white long-sleeved wedding gown as she clutched a bouquet of flowers in her right hand, while Simon beamed down at her in a black suit with a light blue tie and white shirt.

A pastel yellow flower was tucked into his lapel.

Unsurprisingly, fans of the couple rushed to their keyboards to send a message to the couple.

Another added: "Congratulations, both!"

While a fourth follower said: "Looking like a fabulous couple. Many congratulations."

He told Daily Mail at the time: "Yes, it’s true.

"We are both so happy, as are our children."

He confirmed their split in January 2019 after 12 years of marriage.

Speaking to Daily Mail at the time, the former BBC royal correspondent shared his sadness, stating: "It is very sad. All I would like to say is that I give Victoria my very best wishes for her future."

Emma has already been married three times before. She also has two children from her previous marriages, while Simon has a son, Max, from his first marriage.

Simon was the main presenter on BBC News At One before leaving the broadcaster to be part of the launch of GB News.

He hosts the morning programme on the news channel alongside Kirsty Gallacher.

Emma, meanwhile, is best known for her role in Dynasty, in which she played Fallon Carrington Colby.

She has also had roles in shows like Doctors, General Hospital and Holby City, as well as iconic crime soap The Bill.