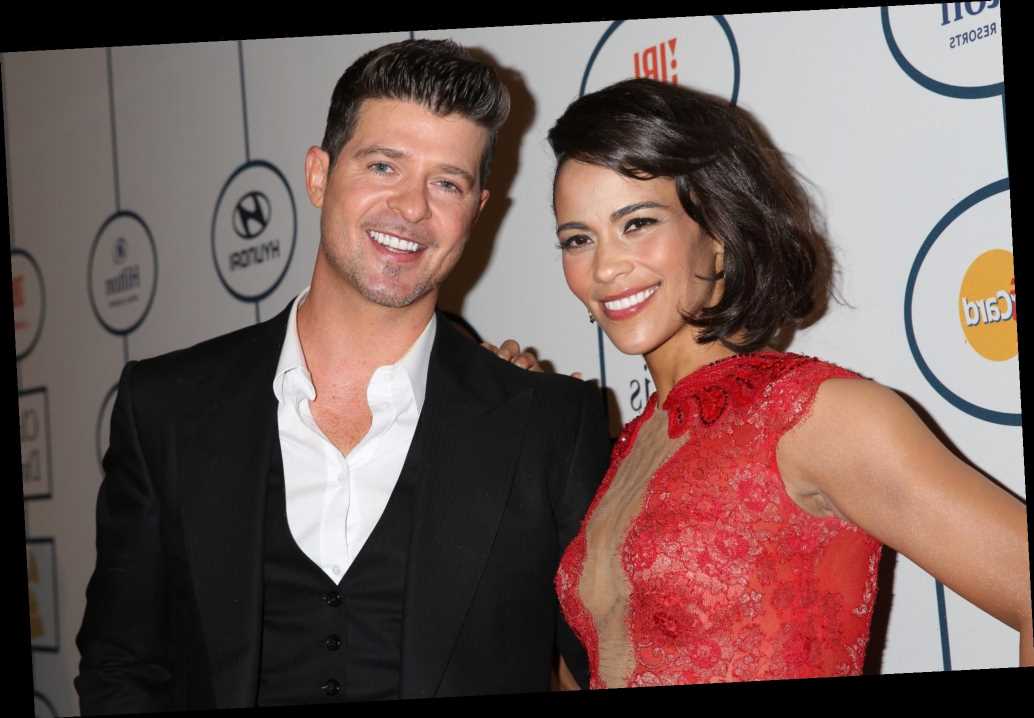 Robin Thicke and his ex-wife Paula Patton have come a long way since their 2014 divorce.

In this week's issue of PEOPLE, on newsstands Friday, the singer, 43, opens up about mending his once-contentious relationship with the actress, 45, over the past seven years for the benefit of their son Julian, 10.

"There's so much emotion when you first break up, and there's so much stuff that spills over," Thicke says. "But time heals those wounds, and she's an incredible person."

"Once you can put yourself second, your son rises to the top and you go, 'It's not about us anymore,'" he adds. "We're very lucky the way everything has worked out."

Thicke and Patton first met as teens at an under-21 hip-hop club in Los Angeles and wed in 2005. They were by each other's side when in 2013, Thicke had his breakthrough moment with his Pharrell Williams and T.I. collaboration "Blurred Lines." "My marriage to Paula was crumbling," he says. "I started using painkillers. It was a melting pot of trouble brewing, and I was so arrogant that I thought I could handle it all."

After 21 years together and almost nine years of marriage, Patton filed for divorce in 2014. Alleging infidelity, physical abuse and drug use, Patton and Thicke battled in court over their son. (Thicke has denied the cheating and abuse allegations.)

"Everything seemed to burn down there for a few years," says Thicke.

Indeed, at around the same time, Thicke, along with Williams, was sued by Marvin Gaye's estate for copyright infringement of Gaye's 1977 hit "Got to Give It Up" on "Blurred Lines."  (In 2015, Thicke and Williams were ordered to pay $5.3 million when they lost the case.)

In his deposition, Thicke admitted to abusing pills and alcohol when "Blurred Lines" became a hit.

"That year was a whirlwind of fame, success and overindulgence all coming to a head," Thicke — who says he initially began taking painkillers to manage "terrible" back pain from constant flights — reflects now. "The painkillers became part of the release. I was in a bad place." The loss of his father, Growing Pains star Alan Thicke, to a fatal heart attack in late 2016 was a wakeup call, but Thicke admits he still struggled to get his life back on track.

"I wasn't in a good place when he passed, and I wasn't in a better place right after," he says. "However, a few months later I decided to dedicate my time to raising my son. I put everything aside. That was a big turn for me."

In 2017, Thicke and Patton worked out a custody arrangement for Julian, around the same time the singer's fiancée April Love Geary — whom he met six months after his split from Patton — announced the pregnancy of their first child together, daughter Mia.

Now, Thicke says he and Paula "have never been better" thanks to a solid system of "communication" and "transparency."

"We're co-parenting at our very best, and it shows in Julian's results," Thicke says. "He's thriving and has really blossomed this last year. He's so devoted to school. He's the opposite of me: I was the class clown in the back row. He's in the front of class and loves going to school."

"Maybe he's not my son!" he jokes. "But no, I'm the proudest father because he really is that kind of kid at home."

Despite the age-gap between Julian and his younger siblings Mia, 2½, Lola, 23 months, and Luca, 8 weeks (whom Thicke all shares with Geary, 26), Thicke says he loves spending time with them.

As he prepares to release his new album On Earth, and in Heaven — his first since 2014's Paula — Thicke feels thankful for where he is in life.

"This album is just a testament to all the love in my life and the people that have gotten me here," he says. "I'm just so grateful."

For all the details on Robin Thicke's new chapter, pick up the latest issue of PEOPLE, on newsstands everywhere Friday.