Breaking News
Billie Eilish Says 'Sometimes I Feel Trapped by This Persona I Have Created,' Talks Past Romances
'Community' Made a $42 Million Mistake That Could Prevent 'Six Seasons and a Movie' From Ever Happening
Alan Partridge makes hilarious return with 18-part podcast hosted from his shed
Lucifer season 5 theories: Trixie becomes new ruler of Hell in huge comic book twist
Skip to content

David Byrne fittingly paid tribute to Radiohead, the band that got its name from one of his songs, at the 2019 Rock and Roll Hall of Fame induction ceremony.

When Radiohead first formed, they were known as On a Friday because they practiced Fridays. When it came time to change their name, the band found inspiration from the Talking Heads’ 1986 album, True Stories, which featured the cut “Radio Head”. (The song itself was reportedly inspired by actor Stephen Tobolowky, so there’s also him to thank). The Talking Heads have been a chief influence on the band ever since. In 2007, Byrne conducted an extensive interview with frontman Thom Yorke for Wired, while in 2016, guitarist Jonny Greenwood cited the importance of Remain in Light on Radiohead’s album, A Moon Shaped Pool.

While Radiohead themselves were always tepid about their induction into the Rock and Roll Hall of Fame, Byrne delivered a glowing induction speech, which you can read below.

I was surprised and very flattered when Radiohead stated that, yes, they named themselves after a song I’d written. But had to ask myself, “Why that song? That slightly goofy Tex-Mex song? Why that one?” We’ll never know.

Thankfully, I’m a huge fan of the group. They richly deserve this honor for two reasons: their music, the quality and constant innovation, but equally for their innovations in how they release their work — that has affected the entire music business, and there’s quite a few people in the music business in this room tonight. They’re creative and smart in both areas, a rare and inspiring combination.

Here’s a tidbit: Radio 1 in the UK refused to play their song “Creep” because they found it too depressing. But then it started getting played elsewhere all over the world, and, well, the rest… 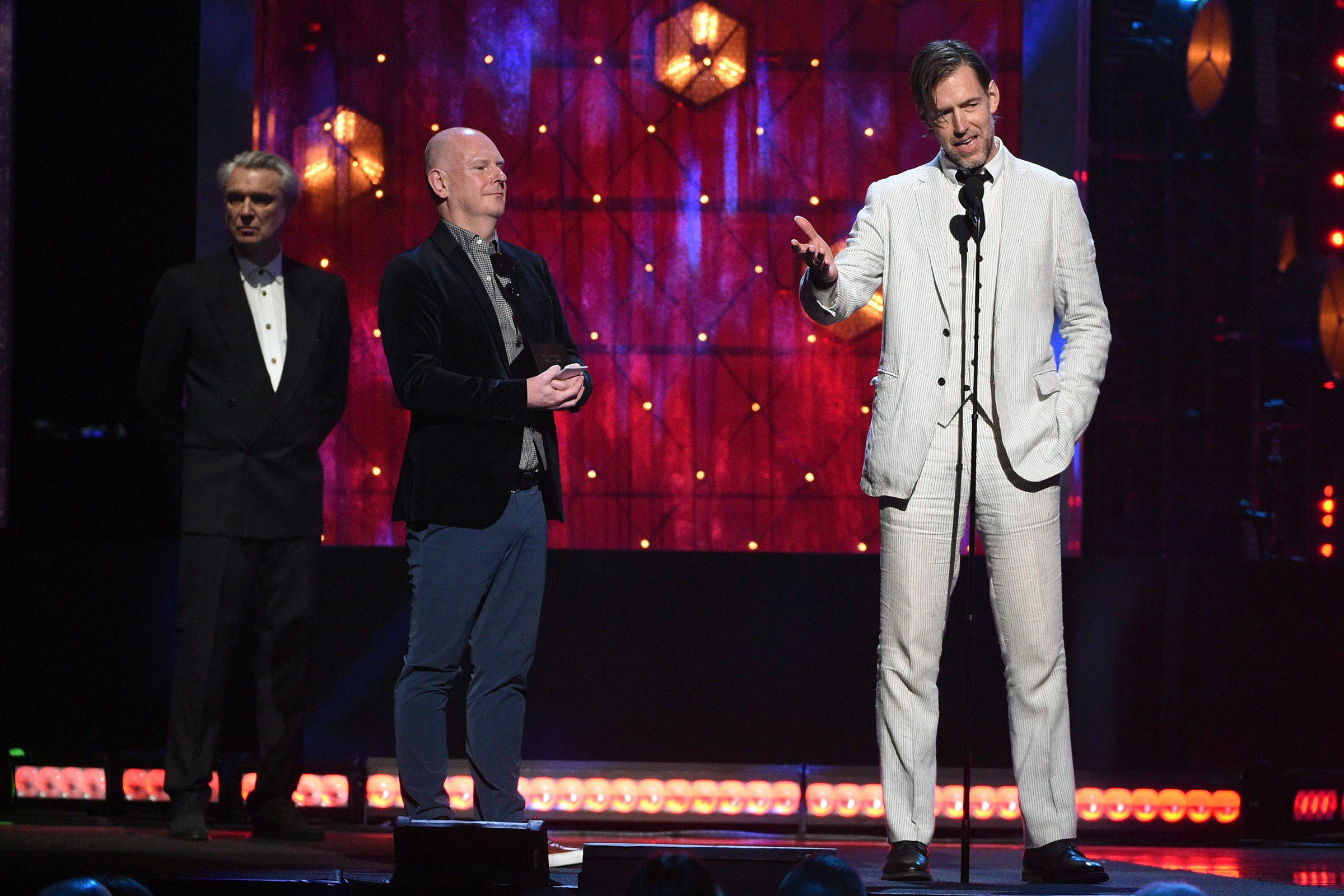 And another: Capitol Records felt that what many consider to be their masterpiece, OK Computer, was career suicide and adjusted their release and marketing plan accordingly. It eventually went to Number 1 in the UK. “Paranoid Android,” from that album, was considered the new “Bohemian Rhapsody,” whatever that means. I’m looking forward to seeing the movie, and seeing who will play Thom.

It proved to me that the artistic risk paid off and music fans sometimes are not stupid.

For me, their record after that, Kid A, was my conversion moment. The record joined together electronics with song forms blew me away. I’d never heard anything like it. There are elements and influences of Can and Miles Davis’s electric period, but this was very different.

What was really weird and very encouraging was that it was popular. It was a hit! It proved to me that the artistic risk paid off and music fans sometimes are not stupid. Some of that will be attested to by those in the music industry in the room tonight. As experimental as it was, it went to Number 1 in the US. Business-wise, they were already innovating. This was in the year 2000, with an app that you could stream music on and access things.

Now a few records later, with In Rainbows, the music that at one point sounded radical and on the edge now felt completely natural. And at that point they took the radical leap of selling the record for the price of “pay what you wish.” You could pay zero or one cent. You could pay the price that records were going for that year. It turned out most people did pay the going rate, and some people actually paid more. Which was, I thought, an incredible thing. They showed trust in the audience, trust in the public. They trusted them to place value in the music and say: You tell us what you think it’s worth. And the audience responded and said: We think it’s worth something. This was a wonderful social experiment, not just an experiment in the music business.

Further release innovations: They released the rejected Bond theme “Spectre,” which was never used, on SoundCloud. And musically, they keep changing. Their last record, Moon-Shaped Pool, sounded very cinematic, sounded like a movie in your head. They’ve both changed our idea of what popular music can be and how it can be released and marketed to us. For those things, I am honored to induct Radiohead into the Rock and Roll Hall of Fame.

Billie Eilish Says 'Sometimes I Feel Trapped by This Persona I Have Created,' Talks Past Romances