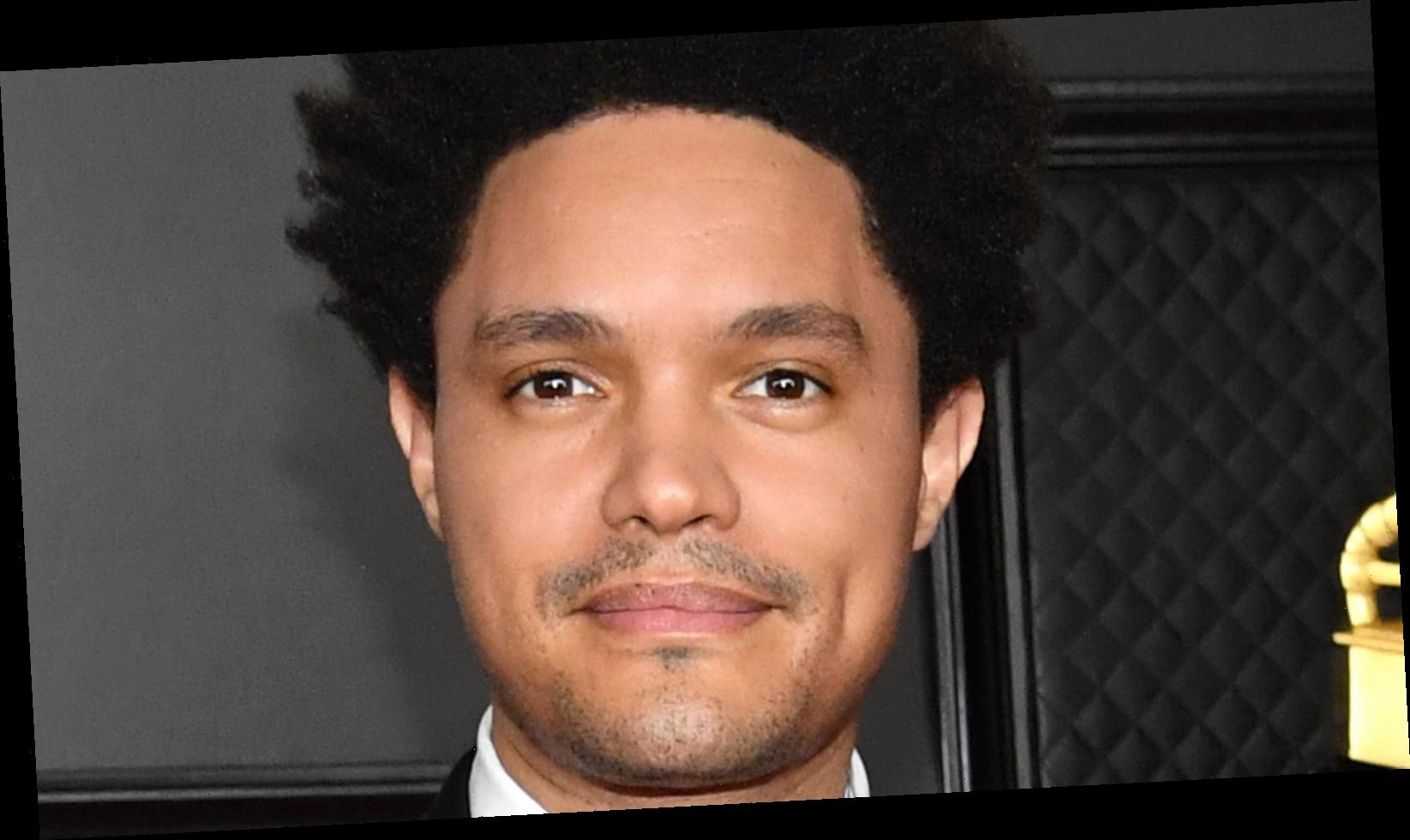 After a long year of pandemic living, the 2021 Grammy Awards gave us energy, entertainment, and fashion. Though in some fashion cases, is there a receipt?

On March 14, 2021, we finally pressed play on the 63rd annual Grammy Awards on CBS after a two-month pause (how is this CD metaphor treating you?) due to coronavirus “safety concerns,” per Variety. Hosted by a dapper and joke-dishing Trevor Noah, the 3-plus-hour affair was worth the wait. Viewers got a fantastic blend of pre-taped and live performances (Bruno Mars and Anderson Paak. harmonizing; yes!), all taking place at an “undisclosed building” in downtown Los Angeles, Calif., according to Rolling Stone. Mysterious! But a little less mysterious is whether this year’s nominees and performers brought the fashion. (Hint: Some absolutely did… We said some.)

The Grammy Awards are never short on iconic style moments. It’s where Jennifer Lopez wore her famous Versace jungle dress in 2000, where Cardi B. came out of her shell (literally) in a gorgeous Thierry Mugler oyster gown in 2019, and in 2011, Lady Gaga arrived in… an egg. And this year was no different, from Harry Styles’ shirtless performance that had the internet sweating, to Megan Thee Stallion’s orange show-stopper, to Doja Cat’s… hmmm.

Here are the 2021 Grammys looks ranked from best to worst. Whose outfits went double-platinum, and whose are going… straight to the bargain bin? Strut on down and see our picks!

“Orange you glad” Megan Thee Stallion went full glamour? The beloved Texas-born rapper was a vision as she accepted the prestigious Grammy award for Best New Artist, per Pitchfork. And she did so in an orange gown that was bold, stunning, everything. Presented by the dynamic Lizzo, Megan Thee Stallion was breathtaking as she took the stage and even got an applause break as soon as she got up there to accept her award. The teary-eyed superstar finished off the classy look with diamonds for days.

According to ET Online, the fierce number was designed by Dolce & Gabbana and, “featured a thigh-high slit and a dramatic bow on the back.” The outlet added that “she accessorized with Chopard jewelry, which included a necklace that has almost 100 carats of diamonds.” This look was more than just “Savage,” it was timeless, and perfect for her.

As The New York Times pointed out, Megan Thee Stallion is the first female rapper to win Best New Artist since Lauryn Hill took the prize home in 1999. So this win is historic, and the look was Iconic!

We had no bones to pick with Phoebe Bridgers’ amazing skeleton outfit. The “Kyoto” singer, who was nominated for four awards including Best New Artist, took to the 2021 Grammys red carpet pre-show in an incredible skeleton dress designed by Thom Browne. According to Page Six, “the sheer black gown [was] studded with pearls and crystals to create a 3-D skeleton silhouette.” Are you sure Emma Stone is a lock for Disney’s Cruella? Because we have thoughts.

“I wear a skeleton costume all the time, the star told E! with a laugh during the pre-show. “But one of the reasons I do is because I saw this Thom Browne dress forever ago and thought it was so cool. And I asked for it. I basically stole it.” We love the whole casual, creepy, clavicle couture vibe.

“This look was grammy award winning on its own,” one Twitter user wrote. “I wish I could commit to anything the way @phoebe_bridgers commits to that skeleton onesie,” wrote another. Halloween may be months away, but also, it’s right now. Because Phoebe Bridgers.

Harry Styles was a shirtless wonder

Harry Styles kicked off the 2021 Grammys with a live performance that had, well, “Moves Like Jagger.” And looks like Jagger too. Styles, who won Best Pop Solo Performance, channeled his inner rock god as he strutted the stage for his hit, “Watermellon Sugar.” He wore, per I Am Fashion, a “custom Gucci” leather suit (no undershirt, mind you), topped with a green feather boa. The boa read a bit as, “bar mitzvah hype-dancer,” but we didn’t mind. And neither did the internet, who clearly wanted a slice.

“Damn Harry styles. Jeezzzz,” singer Bebe Rexha wrote. “Harry Styles just opened the Grammys, singed, danced, whistled, in a leather suit NO I am not okayyy,” another Twitter user wrote. “i think we can all agree that harry styles performing shirtless in a leather suit single handedly saved 2021” wrote a third. A fourth pointed out that the look was perhaps inspired by another rock star; the late Freddie Mercury.

Regardless, it was an experience. And as Styles tossed aside his boa to fully prance the stage and do a bit of leather booty-shaking, our eyes were going… in One Direction.

Noah Cyrus received her first Grammy nomination at the 2021 award show in the Best New Artist category. And she took to the red carpet in something pretty incredible. According to The Hollywood Reporter, the “white floor-length gown with deep-V neck and its matching cape” was designed by Daniel Roseberry for Schiaparelli. The younger Cyrus sis looked amazing and larger-than-life.

“I am obsessed with this look,” Cyrus told E! News. “I feel so honored to wear this piece tonight. …I feel so blessed.” Cyrus added that she “started crying” when putting the dress on for the big night. “My dad [Billy Ray Cyrus] texted my mom, ‘She looks like an angel!'” she added. Aw! Yet, there was another reason, aside from tears, that the outfit slightly reminded viewers of Kleenex.

“noah cyrus dressed like a used tissue,” one Twitter user wrote. “Noah Cyrus rolled outta bed & the bed was all “hell no, I’m going WITH you,” wrote another. Yup, we couldn’t (500-thread) count how many internet users had a knee-slappers for this one. The star looked gorgeous, but we see it.

The jury is out on Doja Cat's red carpet outfit

Doja Cat’s red carpet pre-show look, was something if we “Say So” ourselves… The charismatic superstar hit the socially-distanced red carpet in, according to People, a “plunging” motorcycle jacket and green feathered skirt designed by Roberto Cavalli. The outfit was head-turning, but much like the jacket itself, had the internet split down the middle.

“doja cat can pull anything off,” a second Twitter user wrote. “Doja Cat’s giving us a full-on moto moment at the #GRAMMYS,” clothing brand ASOS tweeted.” Yet, others weren’t so fond. “wtf is she wearing,” wrote another user. “she needs to fire her stylist asap,” wrote a yet another. We have to agree. Doja Cat was runway-ready… but mostly, if that runway lead to a spacecraft headed for a distant planet.

“I like something that’s out there. I have been very toned down lately. This is like something I have always wanted to do,” she told E! News’ Giuliana Rancic ahead of the show, noting that the outfit was finished off with actual cat-claws sewn into the sleeves. Doja Cat’s look was “out there,” alright. Carl Sagan-level out there…