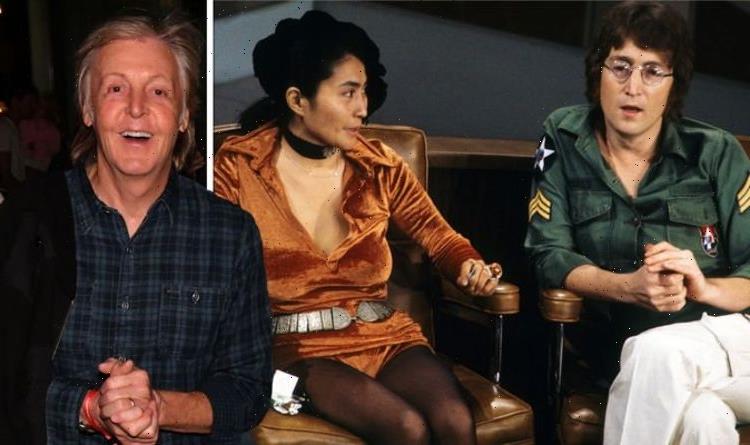 Earlier this week Sir Paul McCartney spoke out about the “truth” behind The Beatles’ split. When it was suggested the band broke up because of him, McCartney responded: “Stop right there. I am not the person who instigated the split. Oh no, no, no. John walked into the room one day and said: ‘I am leaving the Beatles.'”

McCartney claims John Lennon added: “It’s quite thrilling. It’s rather like a divorce.”

He went on to say: “The point of it really was that John was making a new life with Yoko, and he wanted to go in a bag and lie in bed for a week in Amsterdam, for peace.” (Via BBC Radio 4)

However, this story is the opposite of what Lennon claims went on behind the scenes.

Lennon and Yoko Ono appeared on The Dick Cavett Show in 1971. He said: “[Ono] didn’t split up The Beatles. How could one woman split The Beatles? The Beatles were drifting apart.”

Lennon was asked if he realised the band was falling apart. He replied: “Not really. It’s like saying do you remember falling in love? Not quite, no. It just sort of happens.”

He was also quizzed about whether being in the band stopped being “fun” during the final days.

Ono was also keen to give her say on why The Beatles really split up.

Ono confessed: “John has outgrown whatever they were.

“It’s very difficult for four artists who are so brilliant and talented to be together and do everything together. Impossible, almost.

“Whatever they were doing is almost miraculous.”

Speaking on BBC Radio 4’s This Cultural Life, McCartney later added that The Beatles’ split was “the most difficult period of his life”.

He solemnly added: “It was weird because we all knew it was the end of the Beatles but we couldn’t just walk away.”

The Beatles officially disbanded in 1970 after releasing their 12th and final studio album.

The band also released a film, also titled Let It Be, showing them recording the record and getting involved in arguments with one another.

Next month Disney Plus will release Get Back, a three-part documentary from Lord of the Rings director Peter Jackson, using footage from the very same album recording sessions.

This documentary will reportedly show a different side of the band during their final months together.