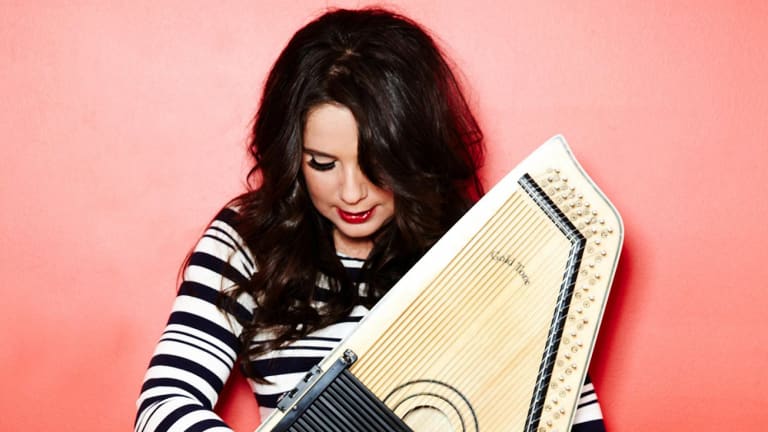 Ivona Rose and her autoharp work their way into your marrow.

You hear the assortment of musical influences remotely, as if they are in the next room. In the foreground is a voice as both a singer and songwriter that sounds like no one else. Perhaps partly it is Ivona​ Rose's Polish background adding a layer of sepia-tinted Euro nostalgia to the folk and pop elements. But, more than that, it is a sense of clarity about how to burrow down to the authenticity of her own songs, so nothing sounds forced, even when they have been quite elaborately arranged and produced (the production being by Rose and Brian Campeau​, with the latter also playing guitar and synthisizers​). The songs are certainly not uniformly strong, but the title track, for instance, grabs you by the throat on the first listening, and sinks into your marrow the more you hear it, the music carrying faint echoes of Kate Bush while the lyrics lament the impact of modern gadgetry on our humanity. The textures are unique, too, with Rose's piano, autoharp or melodica and Campeau's​ contributions coloured here and there by cello or trumpet, and underpinned by the authoritative and groovy rhythm section of Zoe Hauptmann​ and Evan Mannell. JOHN SHAND

TAKE ME TO TOWN (Stanley)

Alternative-country (or just alt-country) can be, according to this 47-track, three-album compilation, defined negatively: it is anything that is not mainstream country; anything that is not Garth Brooks, Shania Twain and those endless, identikit bands and singers from country radio and TV. This compilation is a serious attempt to bring together the best alt-country acts Australia can offer. Some, like Dan Brodie and William Crighton, are known, but most (ever heard of Spurs for Jesus, Eaten by Dogs or the Cruisin' Deuces?) are wide-eyed hopefuls of limited talent and dreams of fame. Like any compilation the result is a very blurry mixed bag, which ranges from none-too-subtle nods to Dylan, Fleetwood Mac, REM, Springsteen​, Mark Knopfler​ and Steve Earle to rockabilly and country blues. There are standout tracks: Jen Mize​ really does have a great folk/blues voice; Helen Townsend has a wonderful 1940s feel about her; Sam Newton's Gategal​ Falls is a beautiful, evocative and deeply felt song; and Katie Brianna's​ Sticks & Stones is subtle, minimal and tender. On balance it is an interesting and worthwhile overview of a largely overlooked area of Australian music. BRUCE ELDER

Atlanta rapper Kodie​ Shane leaps from adolescence to adulthood on her debut album, Young Heartthrob. Freshly turned 20, Shane has come a long way since her sugary 2016 breakout hit, Sad. Young Heartthrob sees her relax into a style that oscillates between pop and R&B, a far cry from the hyper-spirited teen she was when she established herself. The production is rich and luscious, especially on Don't Fight It and the upbeat Flex on Me. Shane once crooned about wanting to feel sadness, and on Love & Drugz​ II (which features Trippe​ Redd​), her melancholy is palpable. "Love is so hard to build/", she sings on Learning, "Can't tell the flaw from real". All the trials and tribulations of someone's 20s are encapsulated on this record; from loneliness and relationships to heartbreak and flexing. Shane herself says, "The whole album is just me growing up", and, as with any journey, it has its pitfalls. Her biggest downfall continues to be her inability to grab the listener. It's hard to describe what exactly is missing that would have made a good album great, but perhaps it's that Shane doesn't know who she is, yet. This young heartthrob is still figuring things out. KISH LAL

Saint-Saens could not have hoped for a more persuasive advocate than the superb young French pianist Bertrand Chamayou​, with his impeccable technique and Gallic flair – at once cool, yet swaggering. The 19th-century French composer had little impact on the piano repertoire, apart from his second concerto and an etude in the form of a waltz, both of which are here. Chamayou​ joins with the Orchestre​ National de France and Emmanuel Krivine​ in the second concerto and the fifth, The Egyptian, in elegant yet passionate accounts, with crystalline playing that is characterful​, lyrical and joyful. The second concerto has fared well in recordings, and this is up with the best. It opens with an extended bravura solo passage, and from the first notes it is obvious Chamayou​ is remarkable. The second movement of The Egyptian, based on a Nubian melody, includes some fascinatingly unusual pianistic touches. The album also contains seven solo miniatures, and Chamayou​ convinces one that the old reactionary – for so Saint-Saens was regarded in later life – could really write. The languid yet delicately coloured Nonchalant Waltz, for example, deserves to be better known. BARNEY ZWARTZ​

No, I hadn't heard of Jeff Siegel​ either, but the American drummer leads a storming band. This live album was recorded on the last date of a European tour, so the quartet was well primed. Alas the gig was in London on the night of a tube strike, shrinking the audience, although, as often happens in the face of mutual adversity, band and listeners sound like they bonded all the more strongly. With Siegel​ are tenor saxophonist Erica Lindsay, pianist Francesca Tanksley​ and bassist Uli Langthaler​, and the collective language, in terms of compositions, improvisation and even saxophone sound, is often overtly post-Coltrane to a degree that would usually drive me to distraction. The energy that this quartet generates, however, sweeps away such thoughts on a tide of sheer elation. Aside from the originals (by Siegel​, Lindsay and Tanksley​) they cover Coltrane's​ majestic Peace on Earth, and then the excitement reaches its apotheosis on the traditional spiritual I Want Jesus to Walk with Me, which rides on a rolling groove as unstoppable as a mid-ocean swell, atop which both Tanksley​ and Lindsay build solos in which the rapture is underpinned by deeper truths. JOHN SHAND

MY NAME IS SAFE IN YOUR MOUTH (Bella Union/Inertia)

Whenever you hear that an English songwriter has moved to the country you can lay bets the next record will involve turning down the volume, pulling back on the bluster and possibly gazing at the navel. So it goes on the debut solo album from Liela Moss, best known as singer with English rock band the Duke Spirit. Her shift to Somerset banishes the thudding drums and galloping electric guitars to the barn, while ushering in strings that drift like low-lying grey clouds, carefully trying to trace the arcs left by Scott Walker and Nick Drake. As for rhythms, they march slowly to a reptilian heartbeat, and are heavy on tom-tom rolls, shakers and chimes. Moss has said that she created these songs while staring out the studio window and observing the landscape, so birds, storms, rivers, the moon and "new leaves where there were dead flowers" all feature heavily. There's a bit too much weather and gauzy introspection on show, but Memories and Faces is a stately opener, Unequal balances tub-thumping with woozy orchestration and New Leaves gets under the skin with Moss's pleading mantra, "Can you feel the love and know it's from me?" BARRY DIVOLA​