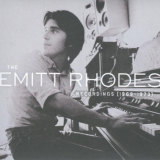 I'm a music critic and a music nerd, but occasionally I find a gaping hole in my knowledge. This happened a couple of weeks ago while using the Discovery function on Spotify, which spews out a weekly personal playlist curated from the music styles you've been listening to most often.

A song called You're a Very Lovely Woman by the Merry-Go-Round came up. It stopped me in my tracks. I discovered they were a late-'60s Los Angeles psychedelic pop group led by singer-songwriter Emitt Rhodes. Soon I was crawling down a rabbit hole, seeking out everything he'd recorded. Rhodes came across like a missing link between Paul McCartney, Ray Davies and Harry Nilsson, but at the same time sounded utterly contemporary.

I realised I'd heard him before without even knowing it – his song Lullaby appears in Wes Anderson's film The Royal Tenenbaums; the Bangles covered Live on their debut album. I also discovered he had the classic cult-artist trajectory. After the band broke up in 1969, he was hailed "a one-man Beatles", writing, producing and playing all instruments on four early-'70s solo albums, only to suffer the usual cocktail of bad luck, music industry bastardry and crippling depression that befell some of my favourite artists of that era, such as Badfinger and Big Star.

After 1973, he went over four decades until releasing his next record, the 2016 album Rainbow Ends, which features contributions from Jason Falkner, Jon Brion and Aimee Mann. On the cover of his 1970 debut solo album, he peers through a window, looking fresh-faced, handsome and a little melancholy. On Rainbow Ends he also looks out a window, but he is grey, grizzled and 60-something. He appears to be weeping. "Thought my dreams would never end," he sings on the album's title track, "but my eyes they're open now."

To read more from Good Weekend magazine, visit our page at The Sydney Morning Herald, The Age and Brisbane Times.

Beyoncé Says 'We Need Justice for George Floyd': 'No More Seeing People of Color as Less Than Human'

Killer Mike Wants ‘Racism Burned to the Ground,’ Not the City of Atlanta, as Protesters Rage Over George Floyd’s Death