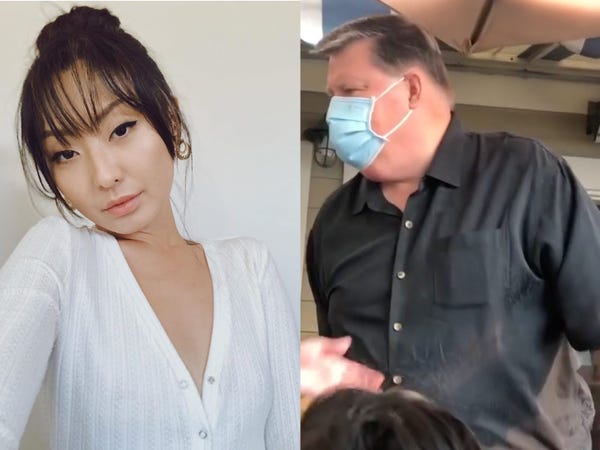 Sophia Chang, a Korean-American entrepreneur and YouTuber who has accrued nearly 850,000 subscribers over the last decade, says that she and her sister were the victims of an unprovoked racist tirade while dining out in Newport Beach, CA on September 12.

In an Instagram post on Monday, the 28-year-old wrote that she and her sister Robin were sitting down to dinner at the Bluewater Grill when another patron approached them, telling the pair to "go back to Wuhan." When they asked why he would make such a suggestion, Chang says, the patron responded, "I don't speak Chinese, I don't know what you're talking about."

The comment references the city in China where the novel coronavirus was initially identified earlier this year. Since the coronavirus was detected in the United States, Asian Americans have reported physical and verbal abuse due to misplaced blame, Insider reported — and more than 30% of Americans have witnessed someone blaming people of Asian descent for the pandemic, according to an Ipsos survey conducted in late April.

"I'm so disgusted," Chang wrote in the post. "If you see people practicing this sort of behavior. REPORT THEM."

She also shared video footage of her interaction with the patron and restaurant staff following the initial altercation. In the clip, the sisters report the incident to a Bluewater Grill employee — and their alleged tormenter says he has "no idea" what the two were talking about.

Robin Chang then said the two would be leaving the restaurant if their fellow patron was not removed from the premises.

The Bluewater Grill employee can be seen approaching the man's table before the footage ends.

My sister and I sat down to eat dinner at @bluewatergrill in Newport Beach and this man made direct eye contact with us and said “go back to Wuhan” as he headed to the bathroom. Once he returned, we asked him why he would say that and he goes “I don’t speak Chinese, I don’t know what you’re talking about”. I’m so disgusted. If you see people practicing this sort of behavior. REPORT THEM.

The video quickly racked up over 700,000 views and received thousands of comments.

The following day, Bluewater Grill responded to the incident on Instagram.

"We pride ourselves on our customer service, diverse staff and commitment to a safe environment free of racism or harassment. We do not condone prejudice or racism in any form," the statement read. "This includes remarks made by customers which we cannot control. We take matters like this seriously and are disgusted that any guest would be subjected to an insensitive remark by another guest."

Hello Everyone, We would like to address a situation that occurred at our restaurant last evening. During dinner, a customer let us know that she was on the receiving end of racist comments made by another patron. We immediately addressed the situation with the customer and asked them to leave. We understand that some feel there was a lack of urgency in removing this patron from the premises. However, the safety of all our customers and staff is our utmost concern and we wanted to make sure this situation did not escalate and become hostile. Within 10 minutes the person paid their bill and left the premises. There is also mention of the customer hugging our employee, and we would like to make it clear that this was unsolicited and occurred before our employee was made aware of the situation. After the patron left, we made sure that our guests were comfortable and well taken care of. The patron in question is no longer welcome at Bluewater Grill. Bluewater Grill has been in business 24 years and we pride ourselves on our customer service, diverse staff and commitment to a safe environment free of racism or harassment. We do not condone prejudice or racism in any form. This includes remarks made by customers which we cannot control. We take matters like this seriously and are disgusted that any guest would be subjected to an insensitive remark by another guest. -The Bluewater Grill Family

The statement also addressed social media comments alleging that the restaurant had not removed the customer with sufficient "urgency," writing that restaurant staff ensured that the situation did not escalate before expelling the patron.

Chang later identified her alleged harasser, who she says works at Prudential Financial Inc., sharing his name and photo in a follow-up post in which she recounted the events of the evening that, she said, "replays over and over in [her] head."

"Ever since the pandemic, there has been an increasing number of hateful acts against Asian Americans. It doesn't help that our president called Covid-19 the 'Chinese virus,'" she wrote.

Prudential told Insider in a statement that Prudential has "zero tolerance for discrimination and takes these allegations very seriously." The incident, the company said, is being thoroughly investigated, and "appropriate action will be taken, as warranted."

The company also responded to the allegations on Twitter.

The employee's LinkedIn profile and bio on the Prudential website appear to have been deleted, and he could not be reached for comment.

Initially, Chang appeared to be unsatisfied with Prudential's response, re-sharing her sister's Instagram story alleging that no representatives from the company had contacted her about the incident.

However, she updated her 542,000 followers with another Instagram story on Wednesday, saying that an attorney from Prudential had reached out for her full statement.

Despite Chang's desire for justice and accountability, the influencer says that she has no interest in doxxing her harasser.

"People are sharing this man's home address and personal phone number on social media. Although it is our intention to expose this racist and hold him accountable, it is NOT our intention to violate his privacy," she wrote in another Instagram story. "We do not want these positive actions to be overshadowed by extreme or negative behaviors in response to what this man has done."

Ultimately, she encouraged her followers to "have grace and move with the right intentions while helping create change."