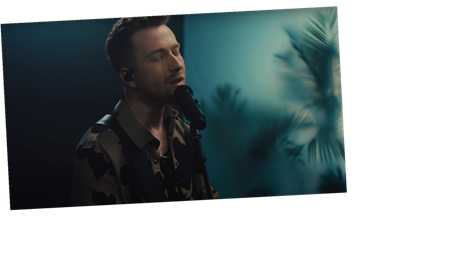 JP Saxe and Maren Morris gave the live performance debut of their collaboration “Line by Line” on The Late Late Show With James Corden on Tuesday night. The pop songwriter also chatted with the host about how he and Morris came to meet each other online.

“I tweeted how much I loved Maren Morris’ songs. I didn’t really see her seeing that tweet as a possibility, but she did,” Saxe said, detailing how he flew to Nashville to write with Morris over two days. “Line by Line,” he said, was the second song they wrote.

Saxe and Morris performed the track, off Saxe’s debut solo album, in a dimly lit studio for Corden, with Saxe strumming his guitar and taking the first verse. The pair harmonize on the chorus, with Morris echoing the lyric “I’ll be writing about you for the rest of my life.” “Line by Line” is about finding songwriting inspiration in a lover, and Morris has written her share about husband Ryan Hurd. (She guests on Hurd’s latest, “Chasing After You.”)

Both Saxe and Morris are nominated at this month’s Grammy Awards. The Toronto-based Saxe is up for Song of the Year for the 2019 single “If the World Was Ending” with Julia Michaels. Morris is nominated for Best Country Song for her crossover hit “The Bones.”