The 75-year-old showed no sign of ill health three months after the tour was postponed because a doctor said he required medical treatment. 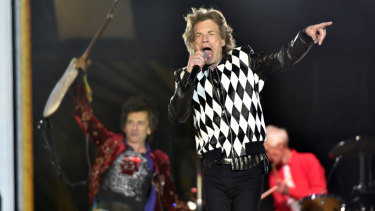 There was no sign of illness as the Stones’ frontman jumped, skipped and sprinted his way through the set.Credit:AP

By all visible indications: Jagger was Jagger.

Before a sold-out crowd of around 60,000 at the Chicago Bears home stadium, the band's finger-wagging frontman opened with Street Fighting Man, running from the stage in the end zone area and down a narrow stage jutting into the crowd on what is normally the 30-yard line of the football field.

He didn't say he was speaking about his health, but could have been as Jagger looked out at the audience and shouted, "It feels pretty good!"

A cross-section of fans, from ages 18 to 80, swayed and bobbed as they roared the lyrics in unison to the finale of one of the over 50-year-old band's favorites, singing, Let's Spend the Night Together.

Jagger sang for over two hours on a massive stage, with the city's skyline as his backdrop, and seemed no worse for the wear. As he bowed, fireworks exploded overhead.

The 'No Filter Tour' was slated to start April 20 in Miami before doctors told Jagger in late March he required treatment, reportedly for a heart valve issue.

Jagger went out of his way to pay homage to Chicago, a home of the blues and long considered an artistic inspiration by the band. He tipped a hat to the Chicago blues with the edgy Midnight Rambler, which featured Jagger himself on harmonica.

"We love Chicago so much we decided to start the tour here instead of Miami," Jagger said, to cheers from the crowd. He also gave a shout out to the new mayor of Chicago, Lori Lightfoot.

The band stuck almost entirely to playing old classics, the set including Let's Spend the Night Together, Gimme Shelter, Brown Sugar, Sympathy for the Devil and You Can't Always Get What You Want. 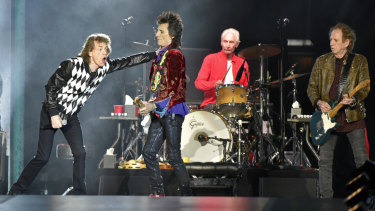 All the Stones are now in their 70s. Guitarist Keith Richards is also 75. Ronnie Wood, who plays guitar as well, is 72. Drummer Charlie Watts is the senior member at 78. And they seemed as enthusiastic as Jagger, and also showed no indication of slowing as the show stretched beyond two hours.

All the cities on the tour that were previously postponed are locked in, and there's a new date in New Orleans. A second show at Soldier Field, the home stadium of the Chicago Bears, is scheduled for Tuesday.

The coast-to-coast tour, which the Stones have said will feature classic hits, will include stops in Florida, Texas, Arizona, California, Washington, Colorado, Pennsylvania, Massachusetts, New Jersey and Washington, DC. Tickets sold for the original dates are being honoured, but those who couldn't attend were able to get refunds by accessing their Ticketmaster accounts.