Harriette Pilbeam was struggling to write songs for her new album when, one day last year, she suddenly had an idea.

“I was like, ‘I want to write a song that’s super simple, really repetitive, just a straight-up compressed New Order pop song,’” says the singer-songwriter better known as Hatchie. “And that’s what happened.”

The result, “Obsessed,” is a riff-driven highlight off Keepsake, Hatchie’s thrilling new debut. The album arrives a year after the sugar-rush pop of Sugar & Spice, an EP that introduced her as a songwriter with a preternatural knack for earworm melodies and swooping hooks. During the past year, she’s opened for everyone from Kylie Minogue to Snail Mail, a testament to her ability to present as pop, indie, or electronic, depending on the setting.

On Keepsake, Hatchie widens both her emotional and musical palette, exploring darker territory and flirting with a harsh industrial sound on songs like “Without a Blush.”

During the past year or two, Pilbeam became acutely aware that her music was being viewed primarily as a vehicle for expressing romantic infatuation. Early songs like “Sugar & Spice” and “Sleep” were bright, synth-heavy depictions of the near-delirious early rush of love. “Just come see me in my dreams,” she sang in the latter, “No wonder I’m smiling in my sleep.”

But when she began writing Keepsake, Hathchie knew she wanted to change course.

“As a young woman, I was like, ‘What is this saying about me that all my songs are about this?’” she says. “There’s nothing wrong with that, but I put a lot of pressure on myself to not write about that, which is silly because it’s what everyone writes about.” 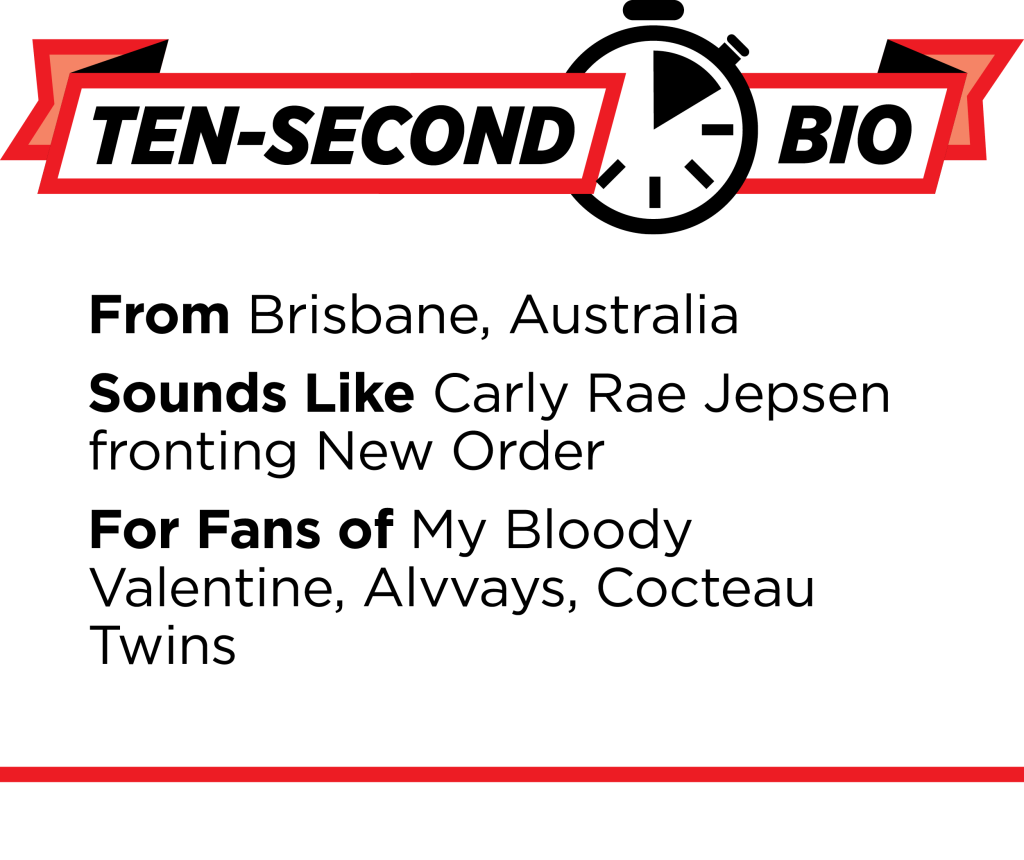 At first listen, some of her new songs sound more in line than ever with the type of love fixation Pilbeam was trying to avoid, despite being about other subjects entirely. “Obsessed” chronicles a platonic friendship so intoxicating and intimate it can border on crazed; “Unwanted Guest” is the story of “someone dragging you to a party and being really pissed off and wanting to leave the party,” she says. “So I was like, even if that’s about a guy, it’s not about being infatuated with and at the mercy of a guy,” Pilbeam says. “It’s about being really angry at a guy.”

Pilbeam hails from Brisbane, Australia, and she credits the local indie scene there as playing an instrumental part in her early formation as an artist. “I met all my friends and my boyfriend and all the people in my band through that scene,” she says, but “today, my music feels pretty separate from it.” When she has time at home these days, she prefers to do laundry and hang out with family.

Pilbeam describes her upbringing as stable and drama-free, which, she speculates today, might be the reason why she found herself gravitating toward writing about love and heartbreak early on in her career. “It was just the most emotional thing I’d ever been through,” the 26-year-old says, “because I had kind of had an easy life.”

Some of the best songs on Keepsake make explicit Hatchie’s ongoing process of sorting out the parameters of her own work. “You can call it an obsession/Call it anything you want to,” she sings on the opening standout “Not That Kind.” It’s a line of winking self-awareness for an artist who’s become increasingly aware of the importance of self-definition, even as she’s realized that her creative persona is ever-evolving.

“I feel like I’m changing so much every six months,” says Pilbeam. “Even this new album feels like a past version of myself.” Since the recording of Keepsake, she’s found herself writing unadulterated dance-pop. She enjoys these early stages of writing, before she needs to conceive of her work within the framework of her career to date.

As an example Pilbeam, tells the story of writing her new song “Stay With Me.” She had begun writing it with collaborator Joe Agius as an “exercise.”

“It wasn’t going to be a Hatchie song. It was going to be, like, a pop song for a pop star,” she explains. “That’s what we were telling ourselves to have more fun and open up more doors. When we were done writing it, I was like, ‘That’s so sick, that was fun. OK, bye! Putting this song away now…’ But then, everyone was like, ‘Why don’t you make it a Hatchie song?’”

Pillbeam pauses a moment, wondering whether there’s a moral to the story she’s telling. “It’s so much more fun to write,” she then says, “without thinking it’s going to be a Hatchie song.”