In the fickle world of electronic music there aren’t many bands that have genuinely gotten better after three albums – fortunately, a fervent Fremantle crowd on Friday night got to see one of those rare groups in action.

Fresh after adding some more words to their name and armed with a cache of bangers from their 2018 album Solace, Sydney trio Rüfüs Du Sol gave a masterclass in electronica set against the Fremantle Arts Centre “haunted” castle backdrop. 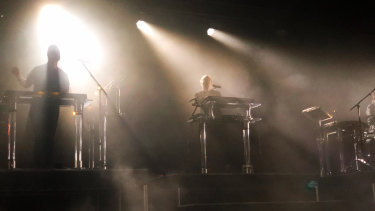 Aided by thousands of LEDs and strobes, Tyrone Lindqvist, Jon George and James Hunt opened with Eyes, invoking an urge to go on an inward soul search as well as stomp the ground.

The one adjective to describe Rüfüs’ tracks that kept popping up was ‘atmospheric’, which can easily sum up the performance and set-up at Fremantle Arts Centre. Fans of Rufus' 2016 album Innerbloom were also satiated, several tracks making it onto the set list.

The soulful Like an Animal and tracks like Brighter, Say a Prayer for Me and the minimalistic and floating title track Innerbloom were gobbled up by the audience.

Not once did the guys lose the packed Freo crowd, even during less frenetic tracks like Sundream from their 2013 debut Atlas.

Testament to the talent of the trio was how well-received songs from Solace were despite it being such a new offering. The album is darker and deeper than much of their previous efforts, but they’ve kept fans and made plenty of new ones.

Treat You Better, New Sky and Lost in My Mind were personal favourites.

The only issues I came across arose from the limitations from the venue itself; one bar and one location for toilets made for some annoying ‘take the ring to Mordor’-style journeys.

A highlight came in the form of a cover of progressive-house god deadmau5’s Not Exactly. I had several flashbacks to an early 20s – and very sweaty – Hamish at ye olden day festivals. Snapping back to the present I found myself sweaty again. I guess I just sweat a lot.

To the outside observer Rüfüs’ discography could sound like one big throbbing bass line, but the quality of production the band displayed is incredible and Australia should be chuffed we have such an export representing us on the inernational stage.

The band finished the night off with No Place, declaring: “There’s no place I’d rather be.”