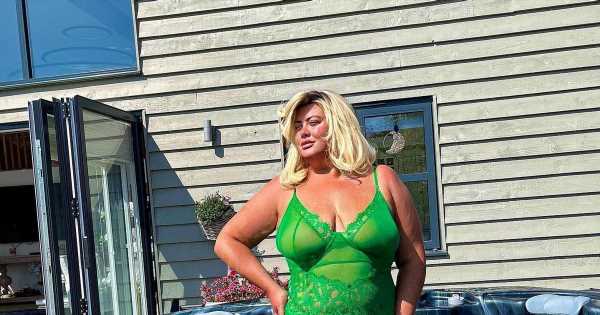 Gemma Collins is now selling personalised clips as she gets herself ready for six months away from the Showbiz world.

The 41-year-old bombshell who found fame on The Only Way Is Essex in 2011, is now flogging messages for her adoring fans for any special occasions.

For a hefty fee of £95, fans could bag the GC's services for birthday shoutouts to remember.

According to the feedback from paying customers, Gemma's videos are well worth almost £100 as the reality star has received glowing five-star feedback on the Memmo.me webiste.

One online user wrote: "This message was more than expected! This felt so personal and so much content! Thank you for doing this it made my daughters birthday! Xx"

Another echoed: "Thank you so so much, what a peach you are! The absolute perfect gift, much love xx"

A third person penned: "This message from Gemma literally made my mums birthday..the 'OMG! ITS THE GC' was heard down the street.. so personal and sweet.. thank you so much! It was amazing!"

While a fourth person praised Gemma for her down-to-earth and talkative approach.

They said: "LOVE IT ! Really well done. GC chatted away like she was a mate so it felt really personal. She was a passenger in the car not in some weird studio so gave it a real feeling. Just perfect."

It would seem as if the starlet is taking on more collaborations as she teamed up with Durex on Thursday, May 26 to flog a sex toy on her Instagram story.

Speaking to her 2million followers, the GC said: "I know that buying a toy can be intimidating but trust me I get it – they can be overwhelming, especially your first time. But guys it doesn't have to be."

She added: "But guys the other day, I was talking to my friends about self-love and I realised everyone wants to talk about it. So we should.

"Durex products aren't scary. Ok guys, so I must show you this one. It's so cute."

Meanwhile, Gemma revealed plans that is planning to start trying for a family with her fiancé Rami Hawash in August and is taking some needed time out of work to prioritise becoming a mum.

The star confessed that she had given herself a "six-month window" to focus on conceiving, explaining she wants to take it easy while "spending time with Rami".