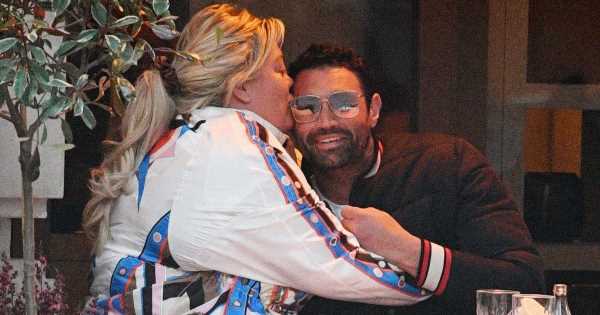 Gemma Collins and Rami Hawash have been snapped getting very close outdoors at a restaurant in London.

The exes were together for four years and even got engaged, but after a devastating split at the time the couple have revealed they’ve reunited seven years later.

Spotted kissing and canoodling at a table while they enjoyed al fresco cocktails and some sushi, the 40-year-old star looked more loved-up than ever as Gemma showed she’s finally moved on from her ex James "Arg" Argent.

Gemma slipped into a bright white, blue and red patterned zip-up jacket for the occasion as she didn’t care who saw her throwing her arms around her former beau.

Her long blonde hair was swept up into a messy ponytail, the reality TV star couldn’t keep her hands off her tall, dark and handsome date.

Gemma leaned over to smooch Rami, 45, on his cheeks and face regularly, pulling him close to her as they sat next to each other watching the world go by.

Opting for a fresh-faced look for the evening, Gemma looked every inch a woman in love as she beamed and grinned spending time with her love.

Rami sported a dark puffer jacket to keep warm and a pair of oversized sunglasses as he lapped up all the attention.

Gemma and Rami were previously engaged after the latter delivered an utterly adorable Christmas proposal back in 2013.

The TOWIE star’s doting beau hid the engagement ring inside a Christmas pudding and all seemed hunky dory for the couple until they split barely a year later.

Rami now has a three-year-old son with another former partner.

According to sources, the couple rekindled their relationship a few months ago.

But so far they have managed to keep their reunion under the radar, surprising fans with an overt display of PDA.

An insider recently told MailOnline: "Gemma has been seeing Rami again in secret for the last six months.

"The pair have enjoyed spending time together and getting reacquainted during date nights in London and Essex.

"Gemma suffered a lot of stress and trauma during her relationship with Arg," the source continued to the publication. “Which has been on and off for years.

"But she’s finally putting herself first and moving forward with her life," the insider added.

DWTDTAOSO: Why Demi Lovato Says There's a 'Piece of History on My Album'

The Real Meaning Behind ‘Just Say Det’ By Moneybagg Yo