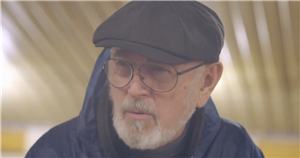 Much-loved star of Downton Abbey and Unforgotten Peter Egan recently took a step outside his comfort zone to go undercover inside a UK factory farm.

The 74-year-old was left shocked by the awful conditions that the chickens were forced to live in, calling it “inhumane”.

The actor undertook the exploration alongside vegan fried chick*n company and activist brand VFC because he wanted to see for himself how birds live inside typical farms and show the rest of the world too.

Peter arrived at the unnamed Shropshire farm where he went inside a huge barn filled with approximately 25,000 chicks, all just two days old.

He immediately saw a dead bird at his feet and another barely alive, gasping desperately for breath.

Peter was horrified to learn that the barn was just one of eight on the site, remarking: “It’s really bleak, isn’t it?” while looking around.

He got visibly emotional watching the horrific scenes, at one point saying: “You sort of find yourself at a loss for words. The only words that are appropriate are: it’s disgusting, it’s horrible, it’s inhumane, it’s uncaring."

“They are obviously sentient. It’s just so upsetting. It’s heartbreaking. This is really, truly devastating.

“There’s 26,000 lives in here and they’re just all ignored. They’re either fed or they’re left to die or they’re fed up and taken way and killed.”

Animal-lover Peter has been a vegan ever since he took part in Veganuary in 2016.

He says that he hopes that others will follow his example and make changes to their diets for the sake of the animals.

He added: “Anyone who eats meat or poultry or fish should see intensive facilities like this and see just how disgusting they are, and ask themselves the question: do you care?”

Peter commented that the lack of care for the chickens was not true farming, declaring: “I don’t understand how anyone can be so careless as to get involved with this and call it farming. Because it’s not farming.

“This is making me feel sick. I feel it in my stomach,” he added.

Peter is a supporter of many animal charities including Animals Asia, Humane Society International, Veganuary and Animal Aid.

He recently launched a petition to change the law to extend the Animal Welfare Act to animals in laboratories – a protection currently denied them.

Get the latest updates from the celebrity world by signing up for the Daily Star Showbiz newsletter .