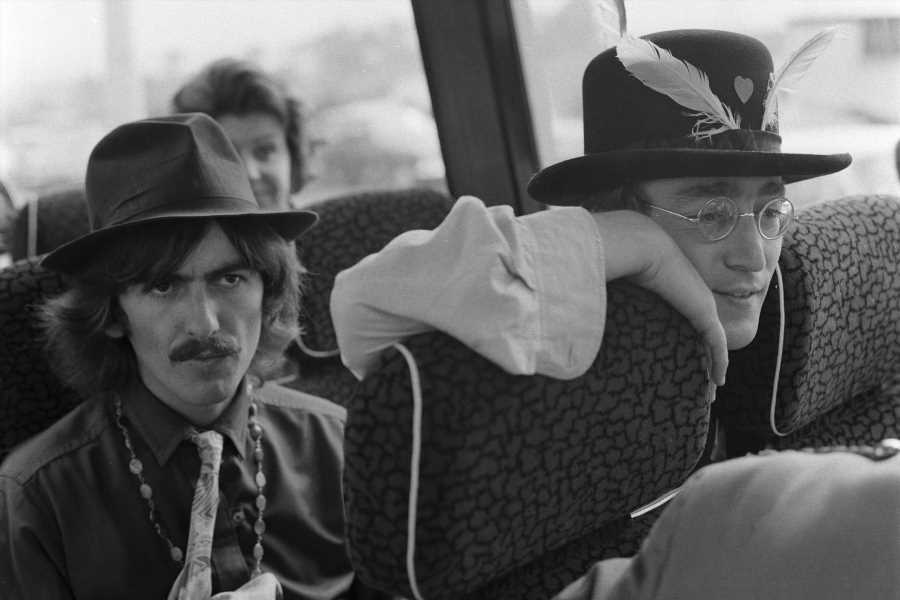 The Beatles, no longer satisfied with just being “more popular than Jesus,” have finally matched him on the resurrection front — well, at least on Twitter.

On Thursday, September 9th, some of the strangest chatter on the timeline came from the accounts of George Harrison (who died almost 20 years ago, on November 29th, 2001) and his fellow late Beatle, John Lennon (who died December 8th, 1980). While both accounts are regularly active — often doing promotional stuff with some archival treats thrown in — their tones shifted suddenly Thursday to something far more conversational as both tweeted through an online listening party celebrating the 50th anniversary of Imagine. The results were a little awkward, to say the least.

The Best Audiophile Turntables for Your Home Audio System

The tweets from both accounts appeared to be actual quotes from old interviews or writings, but they were presented with neither citations nor quotation marks, just laid out flat on the screen, almost as if Harrison and Lennon were somehow tweeting casually from beyond the grave.

For instance, Harrison tweeted: “Having gone through that LSD period with John, right from the first day we ever took it, I understood him and I believe our thoughts were much more in line with each other.” Elsewhere, he reminisced: “I liked the idea of their promoting peace — I was all for that. Right from the time we went to the dentist’s dinner party I knew what John felt about things and it was no surprise to me that he would want some peace. It was also fun for him because he could do it with Yoko.” (Both quotes seem to be from the 2000 Beatles Anthology book.)

The replies contained plenty of earnest love and appreciation from diehard Beatles fans, but also plenty of raised eyebrows and quips. Highlights include: “Think I’m tripping right now listening to George talk to me on September 9, 2021”; “Will you let the man rest, he deserves it”; and, “Dude you’re literally dead.” The award for the most online reply, however, goes to the person who responded to a Harrison rumination about accepting imperfection and “allow[ing] for each others inadequacies or failings with a little compassion” with a “btw” accompanied by a New Girl GIF proclaiming, “You are hot, hot, hot!”

While Lennon’s Twitter was similarly chatty, the replies weren’t necessarily as flummoxed, perhaps due to the regular inclusion of hashtags related to the Imagine listening party (Harrison’s account threw those in occasionally, but not all the time). A rep for The Beatles did not immediately return Rolling Stone’s request for comment on where the various quotes came from, and how this particular social media strategy was settled upon.

Of course, Harrison and Lennon’s Twitters are far from the only active social media channels operated by the estates and families of late musicians and celebrities. Accounts belonging to Bob Marley, Elvis Presley, Tom Petty, Aaliyah, Freddie Mercury, David Bowie, Marilyn Monroe, and even Humphrey Bogart all tweet fairly regularly. Again these missives largely skew toward the promotional or archival, and many personal messages are clearly qualified (e.g. a recent birthday greeting to Bowie’s daughter Lexi, signed by “everyone at DBHQ”). But every now and then you get a break in the space-time continuum, like Tom Petty mourning the death of Charlie Watts.

The internet has greatly recalibrated the way people mourn celebrities. In a 2012 piece for Jewcy, Jacob Silverman wrote about the performative nature of online mourning and the way we’re prompted to “author our own mini-memoirs” about the deceased. The critic Lindsay Zoladz cited that phrase a year later in a Pitchfork essay about the strange experience of browsing FindAGrave.com and being unexpectedly moved by the messages and virtual flowers left by fans on the digital gravestones of artists like Judee Sill and Janis Joplin. They are “mini-memoirs,” Zoladz wrote, “But they don’t feel condemnably narcissistic to me. They’re joyful and sad and silly and heartbreaking. They humanize the musicians as much as they do the people who wrote them.”

The way those Harrison tweets came across yesterday feels almost like an inversion of all that: the dead being virtually re-humanized through their own words, repurposed and presented in a manner natural to social media, to create a kind of mirror of the parasocial relationship only living celebrities get to cultivate when they “engage” their fans online. At a moment when catalog is not only king, but hologram tours for dead artists (or living ones, if you’re ABBA) are becoming more common and popular, maybe this is the natural future of dead celebrity social media. Unnerved comments be damned — some of those Harrison tweets did solid numbers.

Go figure, though, that an artist like Harrison — who was deeply spiritual and even wrote a song, “The Art of Dying,” about reincarnation and trying to leave this mortal coil peacefully — would wind up at the center of this. In a chapter in his memoir, I, Me, Mine, tied to the All Things Must Pass track, Harrison wrote, “You have to practice all your life as you are likely to be in great pain as you are leaving your body — which could be at any moment. I mean I don’t want to be lying there as I’m dying thinking, ‘Oh shit, I forgot to put the cat out,’ or ‘I didn’t get a Rolls-Royce’ because then you may have to come right back just to do those things, and then you have got more knots on your piece of string.”

Indeed, no one should ever leave this Earth thinking, “I wish I’d tweeted more.”