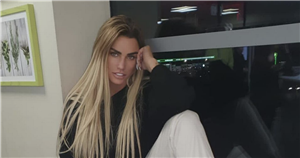 Jackie, 63, who shot to stardom when footage of her controlling a rage-filled Zoom meeting of Handforth Parish Council in Cheshire went viral, said she thinks the troubled star needs a proper chat with someone ordinary.

Model, TV presenter and author Price was spared immediate jail by agreeing to go into rehab after flipping her BMW while banned and under the influence of booze and cocaine.

Jackie tweeted: “I sometimes wonder if media personalities like Katie Price would actually benefit from a real conversation with someone ordinary like me.

“I would offer that as a fellow human being. I am easy to find.”

JPs agreed to put off Price’s sentencing until December while she has treatment after pleading guilty to drink-driving while disqualified and without insurance.

The 43-year-old failed a breath test and swiped positive for cocaine after the crash near West Grinstead, West Sussex, early on Tuesday.

At the time she was serving a two-year road ban – her sixth disqualification. Her lawyer told magistrates on Wednesday that Price had been going through a difficult period, had a lot of personal problems and was facing bankruptcy.

At Crawley Magistrates Court, chair of the bench Julie Hutton told Katie she was free to go but warned her against driving in the meantime.

Katie was informed that the sentence would be deferred on the basis that she go in for treatment at the Priory Centre and would not commit more offences.

The court heard that Katie had been heard saying: "I took drugs, I should not be driving, I admit it all", at the scene of the car crash where she was met by officers.

Katie's defence solicitor, Joe Harrington, requested that her sentencing be deferred for several weeks, which was granted as she checks into the Priory Centre for treatment.

Her sentence was deferred until December 15.

Following Tuesday's crash, Katie's family took to Instagram to state they had been left "concerned" about her wellbeing for some time.

They said: "As a family, we have been and will continue to help Katie get the help she needs. We hope that she realises she cannot battle her issues alone."