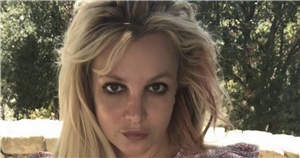 Britney Spears has proved to her adoring Instagram followers that she is back in control of her life.

The bombshell stripped off for the second time since scoring a major win in her conservatorship battle.

Ditching nearly all of her clothes, the 39-year-old looked sensational as she strutted her stuff in just a flimsy pair of red knickers.

Completing her racy attire, she popped on a killer matching coloured pair of knee-high boots.

Captioning the freeing display, she penned: "Pssss you heard me… kiss it."

Fans raced to suggest Britney was responsible for crashing WhatsApp, Facebook and Instagram after all platforms suffered a complete outage for hours on Monday afternoon.

As the internet returned to normal, many of Britney's followers claimed that the pop icon had caused the internet to crash after she'd shared the red-hot image.

They wrote: "Now we officially know what actually broke the internet today."

While others rejoiced in the fact that Britney was finally "free" from her dad Jamie Spears.

"Yaaasss!! The queen of FREEDOM," beamed another fan.

Meanwhile, the Hit Me Baby One More Time hitmaker took time out to thank her supportive fans who had stuck by her during her 13-year conservatorship battle.

Britney explained to her admirers that they had brought her to tears for hours because of their sheer commitment.

She told them: "#FreeBritney movement … I have no words … because of you guys and your constant resilience in freeing me from my conservatorship … my life is now in that direction.

"I cried last night for two hours cause my fans are the best and I know it.

"I feel your hearts and you feel mine … that much I know is true," along with a pink heart emoji.

Last week, Britney's father Jamie Spears was suspended from his role of overseeing his daughter's conservatorship.

In the hearing that took place at Los Angeles Superior Court, Judge Brenda Penny ruled that Jamie Spears remaining in charge of his daughter's estate was "untenable" and "reflects a toxic environment".

As a result, he was instructed to hand over documentation to John Zabel, a certified public accountant, who has now been appointed as temporary conservator for Britney's finances.