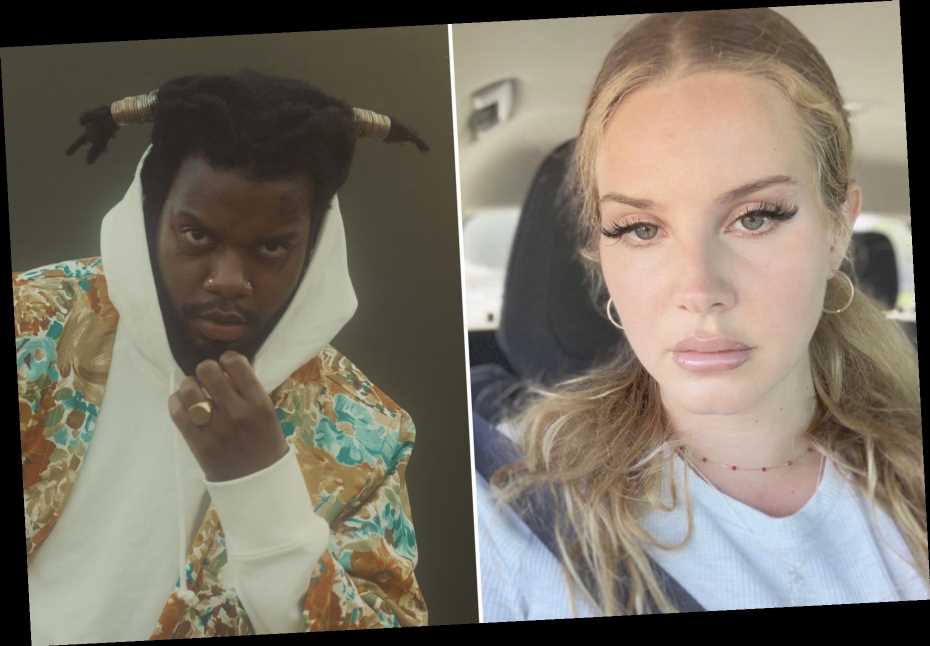 Though Del Rey’s overall project has remained remarkably consistent throughout her career, her growing disillusionment with fame, and with this country’s prevailing iconography of wealth and success, has loomed large as the national mood has grown more dire. Her observations are somber now, her melancholy placed against a more substantial backdrop. Kids dance the Louisiana two-step in a forgotten bar; a prolonged breakup meets its bitter end; people get high and make out in a parking lot while “the whole world is crazy.” It’s an incredibly bleak yet weirdly comforting sentiment all at once – the notion that one’s personal dramas, the ups and downs of “normal” life, will continue to go on even as the rest of the world goes to shit. C.S.

The 10 Most Bizarre Country Christmas Songs

Josiah Wise trades in passion for commitment on Deacon, his latest full-length album as Serpentwithfeet. Since his debut Blisters EP, the choir-trained experimental artist from Baltimore has woven an extensive catalogue depicting the tenderness and lushness of queer romance, with a baroque sonic palette that would be as fitting for a bedroom as a tabernacle. Deacon works in a lighter register, with four-on-the-floor beats and pop hooks, although it’d be disingenuous to call this a party record — Deacon is less “clubby,” and more like dancing in your living room with a glass of wine after dinner. C.S.

Revelación is not the Mexican-American singer’s first stab at recording music in Spanish. A decade ago, she released Spanish versions of her hits a “A Year Without Rain” and “Who Says.” She also recorded a posthumous duet with her namesake, Tejana legend Selena Quintanilla. Gomez became a force in Latin music in 2018 from her feature on DJ Snake’s global smash “Taki Taki” with Cardi B and Ozuna.While there isn’t anything as explosive as “Taki Taki” on Revelación, Gomez finds her groove among the reggaetón beats thanks to one of the genre’s innovators, Puerto Rican producer Marco “Tainy” Masís. On the Latin side, he’s worked with heavy-hitters like Daddy Yankee, Bad Bunny, and J Balvin, and on the pop side with Dua Lipa and Justin Bieber. Gomez is at the perfect intersection of both lanes and Tainy masterfully merges the two together. L.V.

The trap-soul rapper-singer from St. Petersburg, Florida’s latest LP debuted at Number One without much fanfare, promotion or assists from big-name collaborations. That unassuming quality extends to the music too; Rod Wave isn’t an especially gifted rapper and his tales of struggle and success tend to be relatively pro forma. But the honesty, hunger, empathy, and nuance in his voice puts the music past mediocrity — whether he’s taking stock of his own harried jetset life (“Street Runner), celebrating his bottomless work ethic (“All I Got”) or reminiscing over those who can’t be with him on the ride (“Pills & Billz,” which movingly honors a cousin who died of a Fentanyl overdose). Even when the mood gets maudlin or the hour-long album feels stretched or samey, his soulful delivery keeps you in his corner. J.D.

24KGoldn, the 20-year-old San Francisco rapper-singer born Golden Von Jones, has big Gen Z tween-idol energy. Maybe the biggest: What other cherubic, shortie-courting rising star can claim a TikTok-powered Billboard Hot 100 Number One? Among the self-styled scrubs in his orbit, the face-tat-free 24KGoldn is the one most likely to pass muster with the girls in the group text. On El Dorado, his debut full length, he can be as sunny as he can be sad, and his romantic preoccupations are more about making relationships work than resenting the ones he lost. Like any outwardly nice young man, he veers from charming to anodyne to horny, sometimes in the same verse, and he’s more eager than he is self-assured or sharply defined. N.C.

Benny the Butcher, The Plugs I Met 2

Though the title of the Buffalo rapper’s latest release, The Plugs I Met 2, takes up after his 2019 album The Plugs I Met, it’s easy to think about the album as the close of a trilogy of solo work. The first Plugs, from 2019, served as a gritty entry into a world of organized drug crime, shadowy and overcast. Last year’s Burden of Proof was mostly a flashy and triumphant recollection of the spoils of pushing drugs and getting out, with occasional hints at street life’s frustration and loss. On The Plugs I Met 2, Benny explores this sadness and danger more fully over a selection of Harry Fraud beats that meld the grit of the first Plugs with the sheen of Proof. He’s a convincing rap sage; a captivating spitter offering his nefarious experiences with an abundance of awareness of their nuances and influence. M.C.

In 2002, country music legend Loretta Lynn released her memoir Still Woman Enough, reflecting on her journey out of hardscrabble Kentucky and into stardom, with all the triumphs and tragedies between. That book and Lynn’s story gives her new album its title as well as its lone new original song, an affirmation of feminine strength and resilience that she shares with guests Reba McEntire and Carrie Underwood. Produced by John Carter Cash and Lynn’s daughter Patsy Lynn Russell (who also co-wrote the title tune), the project features Lynn’s interpretations of classic country songs from the Carter Family and Hank Williams alongside a handful of traditional tunes and Lynn’s own iconic hits, plus multiple generations of guests who were inspired by her work. J.F.

The members of Gang of Four would likely be the first to tell you that you do not need an extravagant Gang of Four box set. They’re the ones who released a 45 sarcastically titled “To Hell With Poverty” and backed it up with “Capital (It Fails Us Now),” a lampoon about a newborn baby reaching for its credit card. They skewered advertising culture on “I Found That Essence Rare” and quipped, “The problem of leisure, what to do for pleasure, ideal love a new purchase” on “Natural’s Not in It.” But for all the Marxist, anti-capitalist ideology of their lyrics, they also likely know that there’s a difference between needs and wants. And it’s perfectly valid to want 77-81, the box set that compiles the one-two punch of their first LPs, 1979’s Entertainment! and 1981’s Solid Gold, along with singles, live recordings, demos, and memorabilia. K.G.

Valerie June, The Moon and the Stars: Prescription for Dreamers

June has never sounded more fully and thrillingly herself than she does on her latest album, The Moon and Stars: Prescriptions for Dreamers, which merges pop ambition, folksy open-heartedness and blues wisdom. On this 14 track song-cycle, June steps into her own as co-producer (alongside Jack Splash), adding modern drum programming, classic orchestration, and Afrobeat flourishes to her foundation of country-folk, R&B, and roots-rock. Her voice has never sounded more nimble than it does here: fragile one moment (“Fallin),” athletic the next (“Stay”). The songs are meditative and impressionistic, sometimes outright non-narrative. “Within You” and “Stardust Scattering” evoke both the expanded mind of Revolver-era Beatles. J.B.

Singer-songwriter Stevie Knipe has been making music for close to a decade, since they were a college student in upstate New York recording in a dorm room. But Knipe (who uses they/their pronouns) has really taken a leap forward in terms of both sonics and songcraft with the excellent Driver. While previous Adult Mom albums had a spare, bedroom-recording feel, Driver is more of a band album, with bright production and songs that carefully and vividly map out an early-twenties travelogue full of crisis, memory, hope, and the kind of intense moments that feel almost debilitatingly hard-hitting at that age — even if you’re just starting to become wise enough to know they’re ephemeral. J.D.

For 15 years, they’ve been pop’s outliers: A band fronted by a lead singer with roots in jazz and cabaret, playing music that nods to Americana, R&B, pop and everything else but never fails squarely into any of those categories. Hell, Bridget Kearney even plays an upright bass. On Obviously, they’re still oddballs, but in the best way. At a moment when pop strives for lo-fi, solitary-world intimacy, the jazz-pop-whatever band refuse to think small. Fully living up to the water imagery in their name, they’ve made their first truly abashed yacht rock record — with all the hooks, musical interplay, sophistication and sometimes dodgy lyrics of that genre. D.B.

Kings of Leon, When You See Yourself

Kings of Leon frontman Caleb Followill is an arena-rock idealist, a firm believer in the undying power of setting up shop at the 50-yard line of rock & roll expectations and doing very brisk business. “Like in a mainstream melody / Oh, I want to take you in!” he told us on the Kings’ last album, 2016’s Walls, a subtle come-on that was a pretty fair assessment of why his band’s music hit home with millions. So, what do these Tennessee titans do in times like these, when there aren’t any arenas to be rocked? In some ways, the band’s eighth album is an arena rock of the mind, tempering the strapping anthemics of hits like “Sex on Fire” and “Use Somebody” for songs that stretch out en route to arriving at a serene kind of swagger. J.D