As the Australian Classical and Romantic Orchestra (ARCO) approaches its first season since the death of founding artistic director Richard Gill, Rachael Beesley is all too aware of the responsibility entrusted to her and co-artistic director Nicole van Bruggen.

But she remains sanguine about the future of the ensemble the three musicians founded in 2013 – not least because she feels the spirit of Gill is never far away. 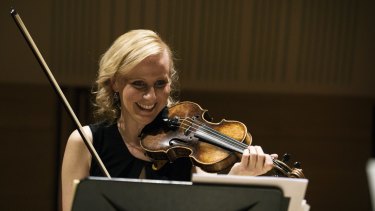 Rachael Beesley says the spirit of Richard Gill is never far away when the orchestra performs.

"His energy and drive and pure dedication is definitely something that will be in the hall," she says.

As the initial shock of Gill's death recedes, the violinist and concertmaster, whom Gill nicknamed "La Beesley", remembers her mentor with great fondness.

"He encouraged you even when you didn't know that you needed it," she says. "He would ring me backstage sometimes 15 minutes before I was directing a program and he knew just what to say.

"You could always ask any questions. Always ask for advice. He was always there for you. We are now taking that on and carrying that flame forward."

The task of carrying that flame rests, in part, with the players in ARCO's youth development ensemble, the Young Mannheim Symphonists.

In November, days after Gill died, YMS played a tribute concert in Sydney's City Recital Hall. It was, Beesley says, an extraordinary moment.

"The future of the music is in these young people. They gave their performance an extraordinary sense of Richard's ideas and made it come alive. To witness that was a very special moment. The audience was stunned by the quality and the possibility there is in the future generations of musicians."

Gill's stamp is firmly on the upcoming concert series, entitled Madness & Confrontation, which he helped devise.

The program includes excerpts from The Marriage of Figaro, which Mozart based on the Pierre Beaumarchais' controversial play Day of Madness.

Van Bruggen will be the soloist in Mozart's familiar Clarinet Concerto, but on the relatively unfamiliar basset clarinet.

"There are certain notes that are not played on a modern clarinet," Beesley says. "It's wonderful to hear those colours as Mozart intended."

The concert closes with the even more familiar Beethoven's Fifth. It will be taken at Beethoven's original tempo marking, which can sound unusual to modern concertgoers.

"It requires everybody's trust in the music and the composer but also trust in each other that 'Yep, we can really find what is the intention behind this music'," Beesley says. "What I just love when I get into this music is the language of Mozart and Beethoven and the stories that they are telling.

"They give us the chance to be in those emotional states and really be affected by them."

Alongside the concert series will be a companion music education program, open to the public. Featuring singer-songwriter Lior, it will compare composition in the classical and romantic periods with contemporary composition.

It is, Beesley says, a classic Gill approach.

"He worked endlessly for music and music education," she says. "That dedication is something we will all carry every day in what we are doing."