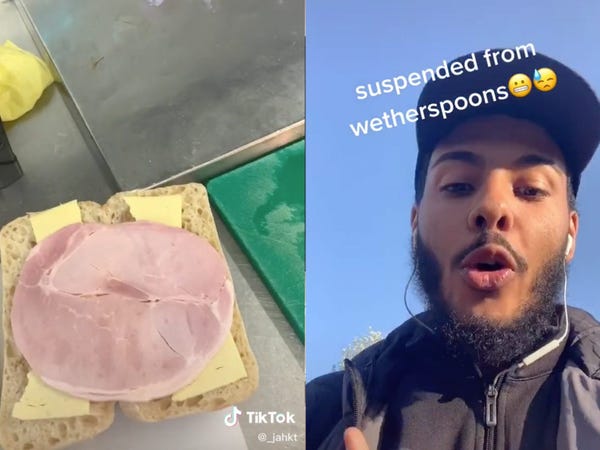 A content creator who says he's a chef at the popular UK chain JD Wetherspoon claims he's been suspended from his position in the pub's kitchen — all thanks to his viral videos revealing the company's food preparation secrets.

TikTok user @_jahkt, who goes by J Salsa on the platform and lists his name as Jaleel Taylor on a linked PayPal profile, began posting videos from the kitchen in early September.

In several clips, the 19-year-old showed viewers how he prepared some of JD Wetherspoon's popular dishes, including the traditional breakfast, southern fried chicken wrap, and paninis.

Taylor told The Sun that he began filming to combat his boredom during a shift and eventually decided to share some of the footage online.

In just one week, Taylor's videos went viral, with several racking up over 1 million views.

To many viewers' surprise, some of Taylor's videos revealed that several of the popular meals were prepared fresh rather than microwaved.

"Breaking the 'spoons stereotypes," the teenager quipped in the comments section where viewers expressed their shock.

One video, however, offered a less flattering look at food preparation.

In the clip, Taylor prepares the chain's chicken curry dish by placing a defrosted curry dish in the microwave and spooning the content of the prepackaged meal onto a plate.

The chicken curry, Taylor claims, isn't the only dish that requires zapping in the microwave.

While eggs and meat were cooked fresh, curries and pasta dishes were frozen and microwaved, he confirmed to the Sun. Certain meals, he said, were often defrosted overnight and then microwaved as necessary in the following days. Still, he stands by the quality of the food.

"They're quite nice even if they are microwaved," he told the outlet.

In a TikTok video posted on Sunday, Taylor said that his employer had come across the videos — and his recent press coverage – and he'd just finished a meeting with his managers to discuss his TikTok presence. Ultimately, he was suspended until further review.

"They were really calm about it, to be honest. They understood and I sort of explained my point of view, that it was a mistake and I didn't mean to cause harm to the company," he said in the clip. "I'm suspended until my disciplinary meeting where I will find out if I get fired or not."

The teenager went on to say that he would not be posting any more Wetherspoon videos "for now."

Taylor's 60,000 followers, however, can expect more content soon; he told The Sun that he's looking forward to posting videos of his own cooking and perhaps videos from the kitchens of other restaurants.

Jaleel Taylor and JD Wetherspoon declined to comment for this story.

Four Seasons Member Tommy DeVito Dead of Coronavirus at 92: 'You Were Loved and Will Be Missed'

Inside Christina Aguilera and Pink’s feud